“I am deeply concerned about the situation of the people who lost their jobs before our investment in Ssangyong Motor. I also worry about the sit-in strikers on the plant’s chimney, and earnestly ask them to come down. The culture of confrontation is not right, I think, and I believe in the value of communication.”

“I come from a company whose culture is to care and trust people and be trusted by the people and the communities in which we work. Therefore, it is naturally a matter of great sadness for me if there are people who are undergoing hardship.”

“If the Tivoli is successful and if the turnaround of Ssangyong is successful, then I assure you that when the time comes and the need comes for fresh recruitment, we will very certainly recruit from the people who lost jobs in 2009. Our priority in the process is those who left our company voluntarily. The rehiring of fired workers will be considered later.” 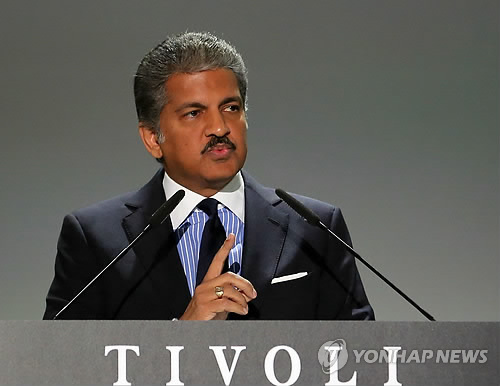 Anand Mahindra, chairman of Mahindra Group, told media that the company would reconsider re-hiring laid off workers who lost their jobs in 2009. (image: Yonhap)

SEOUL, Jan. 14 (Korea Bizwire) – Ssangyong Motor plans to rehire workers laid-off five years ago if it starts making profits, according to the head of the automaker’s parent group.

Anand Mahindra, chairman of Mahindra Group, told media after the launch ceremony of its small-size SUV, Tivoli, at the Dongdaemun Design Plaza in Seoul on January 13 that the company would reconsider re-hiring laid off workers who lost their jobs in 2009.

In April 2009, Ssangyong cut 2,646 jobs after it was put under court receivership in the aftermath of the 2008 global financial crisis. The layoff sparked a 77-day-long strike by 5,500 unionists at the company’s factory in Pyeongtaek, some 70 kilometers south of Seoul. Some 1,900 employees chose to retire, while 164 were dismissed and 455 forced to take unpaid leave.

Among those who were forced to take unpaid leave, 454 were rehired in March 2013, but others have not returned to their jobs.

Since the mass lay-offs, many workers have complained of depression, psychological illnesses and other problems. The suicides of at least 26 workers or family members since then have caused an outcry in South Korea.