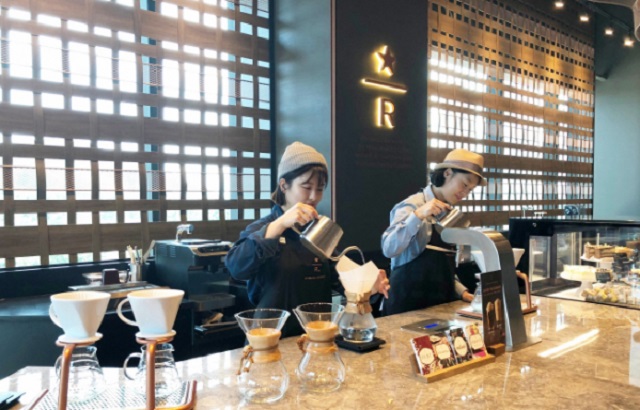 This photo provided by Starbucks Coffee Korea Co. on Aug. 7, 2018, shows the coffee chain’s new premium service store that opened in the eastern beach district of Haeundae in Busan.

SEOUL, Oct. 8 (Korea Bizwire) — Starbucks Coffee Korea is facing demands from its employees to improve working conditions, as they staged a demonstration Thursday in protest of excessive workload stemming from the company’s marketing events.

In contrast, the number of Starbucks employees who have forfeited their rights to receive a pension for quitting their job, taking leaves of absence or getting fired jumped from an average of 378 people each month in 2016 to 545 people between January and August of this year, according to the National Pension Service.

The number of employees treated for mental illnesses jumped from 172 people in 2016 to 600 last year, quadrupling over the last five years.

The company has been releasing cups, bags and other merchandise and it usually gives out diaries at the end of the year to customers who have filled out their stamp-like “e-frequency” reward stamps.

With mere rumors of promotions enough for people to line up in front of Starbucks stores for the latest goods, the company began focusing on releasing new merchandise.

Starbucks stores see a higher number of customers before and after new merchandise is released. Starbucks employees, however, complain that the company has failed to resolve the understaffing problem.

CEO Song Ho-seop sent out a letter of apology to all employees last Tuesday via internal mail. He failed, however, to shed light on plans to increase staffing or restrict releases of new merchandise.

On the very next day, Starbucks announced plans to release this year’s Halloween merchandise on Oct. 12.