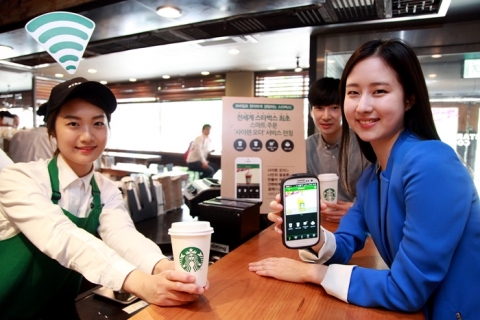 The service will be adopted in Starbucks Korea in priority and the similar one is expected to be implemented in U.S. stores within this year. (image:Starbucks korea)

SEOUL, May 31 (Korea Bizwire) – Now, you can easily order menus in Starbucks coffee shops in Korea through a mobile app and don’t need to wait in line for orders and drink.

Starbucks Korea announced that it launched, for the first time in all of Starbucks in the world, a “Siren Order” service, in which orders can be placed conveniently through mobile applications.

The service will enable “My Starbucks Reward” members to make pre-payments for beverages with Starbucks card app and will bring up pop-up messages such as “order approved,” “beverage being prepared” and “ready to be served” on to the smartphone, when the customer sends her order to the store she walked in.

Adding shots, syrup and whipped cream or switching to low-fat milk or soy milk can also be ordered using the QR code that comes with the application. The application is expected to save both trouble and time from waiting in long line to place an order and get the beverage in crowded times such as during the lunch hours.

The service will be adopted in Starbucks Korea in priority and the similar one is expected to be implemented in U.S. stores within this year.

An official at Starbucks Korea said, “We value communication with our customers above all in our business principles, and communication through digitalized marketing tools such as “Siren Order” will help to extend and innovate our customer relations.”