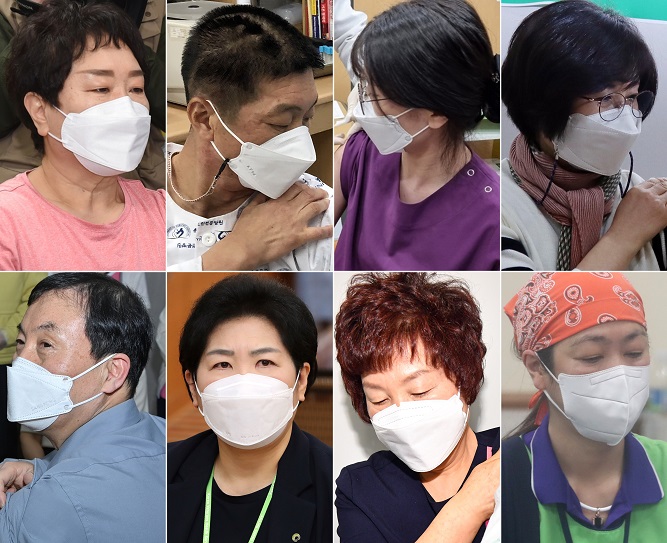 This composite photo shows the first group of South Koreans who received the COVID-19 vaccinations on Feb. 26, 2021. (Yonhap)

SEOUL, Feb. 26 (Korea Bizwire) — With the long-awaited launch of the public vaccination campaign against COVID-19 in South Korea on Friday, many citizens and medical workers nationwide went through mixed feelings of relief, hope and cautious optimism and revealed expectations for an imminent end of the pandemic.

About 13 months after its first confirmed coronavirus case on Jan. 20 last year, the nation began the vaccination of health care workers and patients under 65 years of age at 1,915 locations in Seoul and elsewhere at 9 a.m.

Contrary to previous concerns, most vaccine recipients reported feeling nothing strange and special though they said they felt nervous before getting the coveted shots.

Ordinary citizens waiting for their turn to be vaccinated in the future say they feel relieved even at the news of the start of inoculations, while many small business owners and merchants say they came to be more optimistic about their future and the economy.

Ahn Gwang-suk, who works as a caregiver at a nursing home in Goyang, northwest of Seoul, became one of the first group of Koreans to receive the AstraZeneca vaccine.

“Before being vaccinated, I had vague anxiety, but I now think I will be able to take care of the elderly more safely,” Ahn said with confidence after getting a shot.

“Actually, I was a little worried as my acquaintances had asked me if I was afraid of inoculation. But I had faith that it would be okay. About 20 minutes have passed since the injection, but there are no feelings like side effects at all, and it’s similar to a regular injection,” she said.

Kim Young-sun, a 54-year-old patient at a geriatric hospital in Chuncheon, 85 km northeast of Seoul, said after being vaccinated that he just hopes the coronavirus outbreaks will end quickly so that he can return to his normal life of the past and meet with all the people he wants to see.

Kwak Se-geun, a 59-year-old patient of a convalescent hospital in Yongin, 49 km south of Seoul, also expressed a similar hope after getting a shot, saying he now feels relieved and wants to be reunited with his family and return to normal as soon as possible. 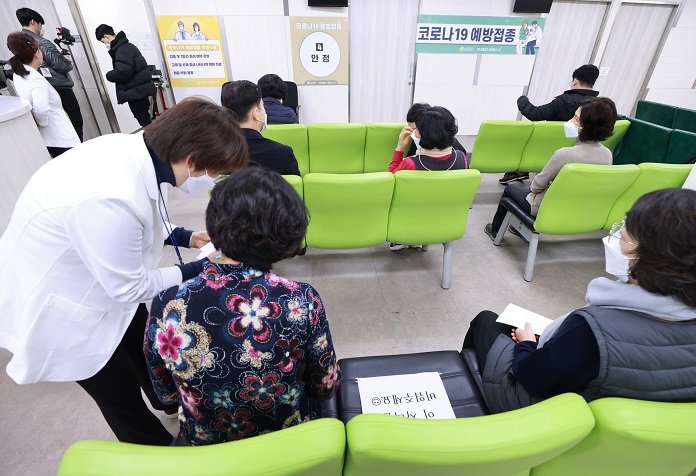 People who received the AstraZeneca vaccine sit in a waiting area of a community health center in southern Seoul on Feb. 26, 2021, to be monitored for possible side effects. (Yonhap)

At an elderly care facility in Daegu, southeastern South Korea, 10 doctors and nurses were injected with the first dose of the two-part vaccine shortly after 9 a.m.

“I was a little nervous, but I don’t feel anything after the injection. I rather feel better now,” a doctor at the Daegu facility said.

One of its employees also said the injection needle didn’t hurt that much though it felt a little special, while noting all of his colleagues are in the best condition.

About 30 minutes after the vaccination was completed, all of the facility’s staff members returned to work.

At Hansol Nursing Hospital, also in Daegu, about 60 people, including 26 patients, got vaccinated on the day.

Kim Hyun-young, a senior nurse, told reporters before administering injections to other medical workers and patients that she feels a bit strained though she does the job every day.

“It has been hard thus far coping with the coronavirus. The start of the vaccinations is very meaningful,” Kim said.

A doctor who received a shot from Kim said metaphorically, “The vaccinations are the sole way to reach the train station of everyday life. Train tickets are free. Let’s return to normal after all of us take part in the vaccinations.” 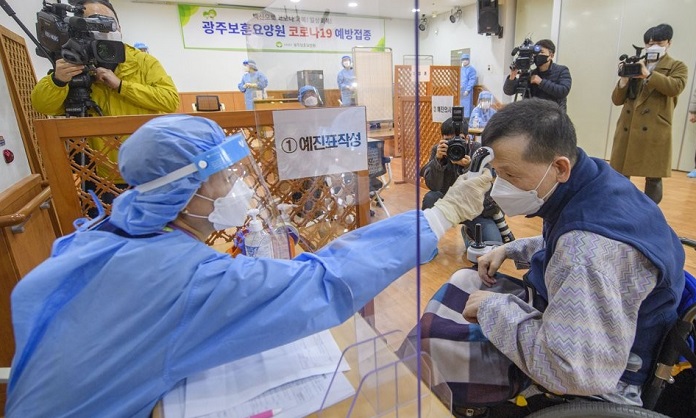 A patient (R) of a convalescent hospital in Gwangju, southwestern South Korea, undergoes a fever check before getting a COVID-19 vaccine shot on Feb. 26, 2021, in this joint press corps photo. (Yonhap)

Optimism also appears to be rising among business owners and merchants.

Yoo Sung-yeol, who runs a meat restaurant in the central Seoul ward of Seongdong, said that he came to have fresh hope due to the news of the vaccinations.

“The past year was really tough, and I have had to endure the hardships. I have lost some of my business, but I now have hope. Other self-employed people and customers also say the situation will be better off due to the vaccinations, and I also feel an overall atmosphere of revival,” Yoo said.

An owner of a sushi restaurant in Uijeongbu, north of Seoul, agreed to Yoo’s view, saying, “The atmosphere is important in the commercial district and the news of vaccinations alone seems to generate energy and vitality. The end of the pandemic may be far away, but I think I can endure a little more.”

A Seoul housewife surnamed Choi voiced hope for an early termination of COVID-19, saying her third-grade child who now goes to school twice a week wants to meet school friends and teachers every day.

Another housewife from Incheon, 40 km west of Seoul, said she feels sorry for her two children restricted from going outdoors and wants to travel freely with them after the vaccinations help improve the overall coronavirus situation.

Many university students also expressed hope the public inoculations would help expedite the resumption of in-person classes in the fall semester.

Park Jeong-jae, a tourist company employee, remains cautiously optimistic, saying that despite the nationwide launch of the vaccinations, the coronavirus situation may not stabilize during this year due to problems linked to variant viruses.

“I hope that good news will come out gradually at the end of this year,” Park said. “Starting next year, I hope that individual tourists will return to Korea and revitalize tourism business districts, such as Seoul’s Myeongdong.”