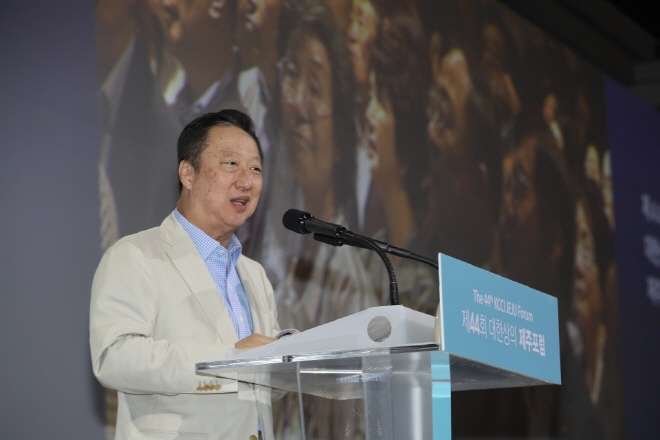 Park Yong-man, chairman of the Korea Chamber of Commerce and Industry, speaks at a forum at Hotel Shilla on the southern resort island of Jeju on Jul. 17, 2019. (Yonhap)

SEOUL, Nov. 4 (Korea Bizwire) — A South Korean business executive who has been actively working for startups in the financial sector that have been trying to navigate murky regulations is gaining praise from the industry.

Recently, Kim Sung-joon, CEO of startup Lendit, a peer-to-peer (P2P) lender, said on SNS that “A major incident has finally happened” and thanked the business executive by saying, “I’ll make sure to give you a lift!”

What he meant by the major incident was the P2P Act. The P2P Act stipulates business activities, entry requirements and compliance for P2P finance.

The person responsible is Park Yong-maan, chairman of the Korea Chamber of Commerce and Industry (KCCI), who persuaded lawmakers to pass the P2P Act.

P2P businesses had struggled to gain traction as there were no related laws and they were subject to the Loan Company Act, which was not written with P2P lending in mind.

However, with the law passed in the National Assembly, P2P finance will now be called a new financial industry, “Online Investment-linked Financial Business.”

Those who intend to conduct P2P financial business in Korea in the future can only do business if they register with the Financial Services Commission.

In other words, there is a way to establish a business within a proper legal framework.

Meanwhile, Park, the former chairman of Doosan Group, a power equipment and construction conglomerate, visited the National Assembly five times for the law to be passed.

He frequently accompanied CEOs of startups whenever he visited, drawing much attention. He is said to have felt the reality of startups facing the industry through his recent meetings with young start-ups.

“Young start-ups, which do not have enough time to compete with other business models, are suffering from problems with the system created by the older generation,” he said.

When the P2P bill was passed by the National Assembly’s subcommittee on legislation in August, he gave thanks to “honorable lawmakers” on social media.

Now that the law has passed the National Assembly, Park is in a position to be applauded.