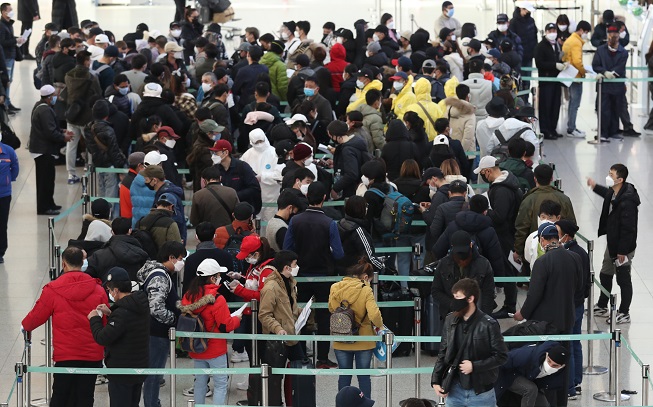 SEOUL, Aug. 26 (Korea Bizwire) – The number of foreigners overstaying in South Korea increased 10 percent on-year in May, as travelers and migrants were stranded by strict border controls around the world due to the novel coronavirus, data showed Wednesday.

The number of foreigners illegally staying in the country reached an all-time high of 396,654 in the month, according to the Korea Immigration Service.

Of them, about 296,000, or 75 percent, were visitors who entered the country without a visa for a 90-day stay. Illegal short-term visitors increased by 11 percent from the same month in 2019.

Long-term immigrants overstaying their visas numbered about 100,000, up 7.4 percent.

The proportion of illegal foreigners also hit a record high of 18.5 percent, exceeding 15.5 percent recorded in December 2019, according to the agency.

“As international travel was blocked due to COVID-19, short-term residents could not leave the country after their visa-free stay period expired,” an official from the Immigration Service said.

“Foreigners who entered the country with a long-term visa have to leave the country after three years of employment to extend their visa. But they have also become illegal residents due to coronavirus travel restrictions.”

The government is making efforts to send illegal immigrants to their home countries if they want, but an increasing number of nations are not willing to accept even their own nationals, the Immigration Service said.