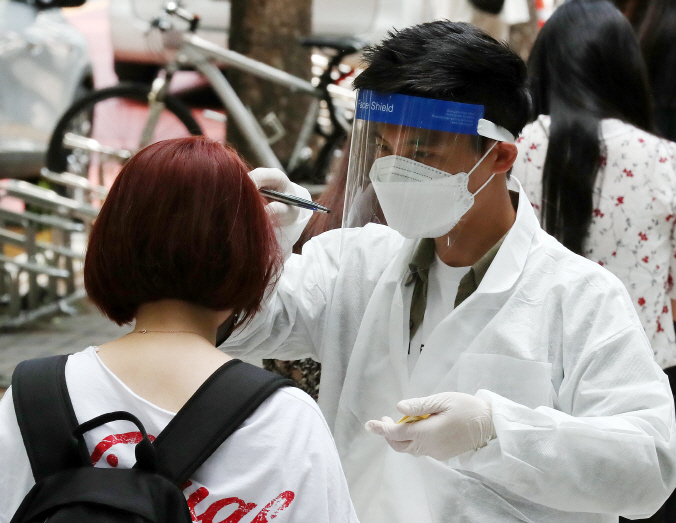 A health worker checks a visitor’s temperature at a virus screening center set up in Bucheon, just west of Seoul, on May 28, 2020. (Yonhap)

SEOUL, May 29 (Korea Bizwire) — South Korea’s government tightened up school quarantine and distancing rules Friday as the novel coronavirus transmission in the greater Seoul area shows no signs of letting up.

In a precautionary move to stem community transmission, the education ministry said it plans to limit the number of students at schools in the capital area.

Elementary and middle schools will be required to cap the number of students at one-third of the total student body and high schools at two-thirds, Vice Education Minister Park Baeg-beom said in a press briefing.

The plan to limit students at in-person classes will also only apply to schools in the capital area, he added.

The reopening of schools is deemed a crucial step toward regaining a semblance of normalcy and running the so-called everyday life quarantine scheme introduced in early May, where people learn to live with the virus amid eased social distancing rules.

The announcement came as health authorities reported 58 new cases after logging a near two-month high of 79 cases on the previous day.

All 58 cases were identified in the capital area. By location, 20 cases were each reported in Seoul and Gyeonggi Province, followed by 18 infections in Incheon, according to the Korea Centers for Disease Control and Prevention.

On top of imposing a cap on student numbers, the government said it will closely monitor facilities and business establishments, such as cram schools and karaoke rooms that are frequently used by young students, to see if they are strictly complying with quarantine rules. 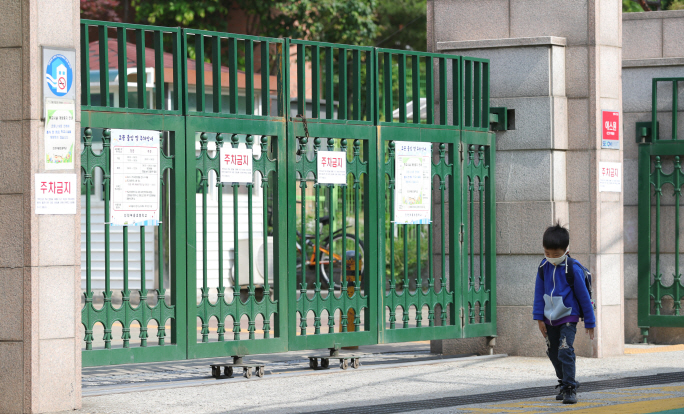 This May 28, 2020, photo shows a child walking past the entrance of an elementary school in Incheon, west of Seoul, that has been closed after a spike in new coronavirus infections in the area. (Yonhap)

On Thursday, the government strongly advised the businesses to close until June 14 to limit the spread of the virus.

If they decide to remain open, they have to make sure that patrons write an entry log, wear masks and maintain at least a 1-meter distance from each other.

“We plan to discuss measures for logistics centers run by online retailers and inspect them,” he said during an interagency meeting.

“In addition to logistics centers, there are some workplaces where a lot of people work in closed spaces … (I urge) health authorities and local governments to find these facilities one by one and inspect their quarantine circumstances,” he added.

Chung’s remarks follow a spike in new infections in Seoul and its surrounding areas traced to logistics centers ran by e-commerce operators Coupang and Market Kurly.

Infections linked to Coupang have reached 102, mostly among people who work at the company’s logistics center in Bucheon, just west of Seoul.

“The (government’s) everyday quarantine scheme has faced a critical challenge. Carelessness is threatening the safety of people in the capital area,” Chung said.

On Thursday, the government tightened quarantine measures in the capital area over the next two weeks as part of efforts to fend off additional infections in the densely-populated area where half of the country’s population lives.