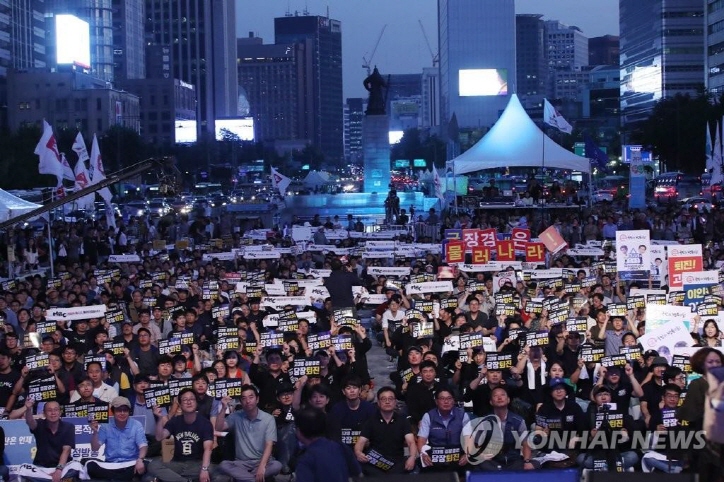 Protesters at KBS and MBC, South Korea’s two major networks, gather at Gwanghwamun Plaza in Seoul on Sept. 8, 2017, to demand the management step down. (image: Yonhap)

SEOUL, Sept. 11 (Korea Bizwire) — As labor unions and management remain in a deadlock, the labor disputes at South Korea’s two major broadcasters are likely to continue for a while, industry watchers said Monday.

The labor unions at KBS and MBC have started a sit-in since Sept. 4, calling for the removal of management accused of meddling in news coverage and unfair labor practices. The management, however, flatly rejected the demand and urged the workers on strike to get back to work.

The major strike involving thousands of journalists and production crew has hampered the operation of the networks. Many programs, including prime-time news programs and popular entertainment shows, have been either scrapped or shortened.

At MBC, the Saturday variety show “Infinite Challenge” didn’t air while a slew of radio programs have also been canceled.

The tension between the two parties intensified on Sept. 1 when an arrest warrant was issued for Kim Jang-kyom, the network’s president and CEO.

Four days later, he appeared at a Seoul district agency of the Ministry of Employment and Labor to be interrogated over suspicions that he violated labor laws and unfairly exerted influence over personnel affairs. He denied the allegations.

Last Friday, one of the board members at the Foundation for Broadcast Culture, the major shareholder of the network, stepped down, raising a suspicion that it is a prelude to bringing in a new member unfavorable to Kim and eventually removing him for good. When more than a majority of the nine members agree, he can be officially stripped of his post.

Protesters at another public broadcaster, KBS, have also stepped up their fight against the management.

The 44th Korea Broadcasting Prizes, run by the Korean Broadcasters Association and supposed to be held on Sept. 1, was postponed indefinitely due to the protest.

The board committee at KBS held an emergency meeting last Wednesday to discuss the current strike, but failed to come up with viable measures amid the absence of its President Ko Dae-young.

Last weekend, a few thousand unionists and civic groups that support the sit-in at both networks took to the street in downtown Seoul, demanding independent news reporting free from political interference.

To prevent the protest from going on for too long, industry experts argue an intervention by authorities such as the Korea Communications Commission is necessary.

“As neither side shows any sign of compromising, the commission should be called in to investigate the internal problems at the networks,” said Jeong Jun-hee, a professor at Chung-Ang University in Seoul.