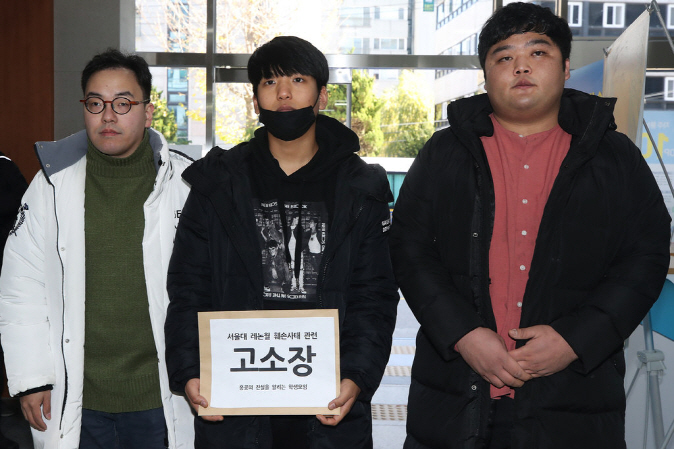 Seoul National University students enter Gwanak Police Station in Seoul on Nov. 20, 2019, to file a suit against people, likely Chinese students studying at the school, who damaged a “Lennon Wall’ set up inside the school’s campus for posters supporting protests in Hong Kong. (Yonhap)

SEOUL, Nov. 21 (Korea Bizwire) — The host organization that set up the ‘Lennon Wall’ at Seoul National University (SNU) to voice support for the democratization movement in Hong Kong plans to take action after the wall was partially damaged by several spectators.

The SNU Student Organization to Tell the Truth About Hong Kong filed a suit against those responsible for damaging the Lennon Wall.

“Pickets attached to the wall were found ripped apart, leading us to assume that somebody had done it deliberately,” the organization said.

“Banners and walls raised at Chonnam National University, Hanyang University, and Yonsei University in support of the Hong Kong protests have also been vandalized.”

The organization said they were forced to take legal action after considering that damaging banners and other means of expression at an educational institution is a serious act of repression that goes against democratic values.

The organization set up the Lennon Wall outside the SNU Library on November 6 to show support for the Hong Kong protests.