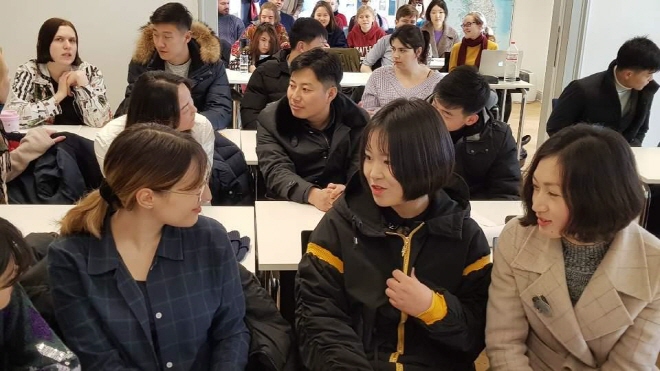 North Korean students talk with German students in a class of the Free University of Berlin in the German capital on Jan. 5, 2020. (Yonhap)

BERLIN, Jan. 5 (Korea Bizwire) — A group of professors and students from Kim Il Sung University, North Korea’s most prestigious institution of higher learning, visited a Berlin university on Sunday as part of academic exchanges amid international sanctions on the North.

The group comprising two professors and 12 students of the Pyongyang school’s German Literature Department went to Germany’s Free University of Berlin after arriving in the German capital the previous day at the invitation of the German school to take part in its winter vacation program.

During the three-week program, they plan to take classes in German culture and history as well as the German language.

In 2014, students from the German Literature Department visited the German capital on a school excursion.

The group’s arrival came after the North Korean and German universities established a memorandum of understanding in 2017 to promote personnel and academic exchanges.

A group of researchers and students from the German school’s Institute of Korean Studies made a trip to North Korea last year at the North Korean university’s invitation.

The North Korean students’ arrival drew attention as it took place amid worsening ties between Washington and Pyongyang and strengthened economic sanctions against the North for its nuclear and missile programs.

The Free University of Berlin has fretted about the German government’s possible refusal to issue visas for them at a time when North Korea’s denuclearization talks with the United States have stalled.

North Korea has sought to implement academic exchanges between Kim Il Sung University’s professors and students and those at Canadian and French schools even though it is under international sanctions.

On Sunday, the North Korean students had a chance to talk with German students in a class of the German university’s Department of Korean Studies.

Lee Eun-Jeung, the head of the Korean Studies Department who arranged the North Korean student’s visit to the German school, said, “We will make efforts to invite students of Kim Il Sung University to our school every year.”