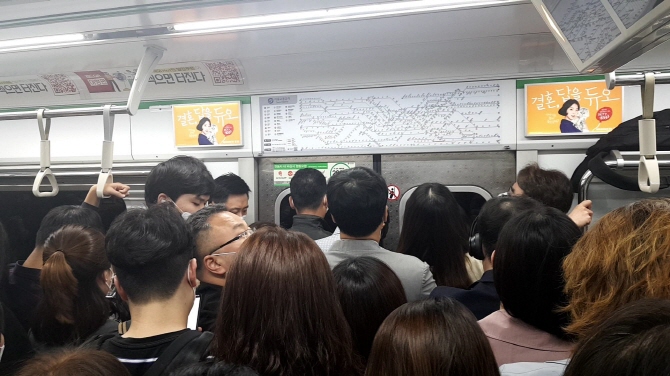 Passengers crowd the subway on Line 2 during their commute on May 6, 2020. (Yonhap)

The Seoul metropolitan government unveiled a set of measures that will begin being implemented Wednesday to let citizens keep social distancing in their daily routines when they use public transportation.

The government plans to restrict people who have no masks from using subways when the proportion of passengers to train capacity hits more than 150 percent.

For citizens who do not have masks, the municipal government plans to sell surgical masks at vending machines, sales outlets and convenience stores located at subway stations in Seoul.

Starting in June, the city government will dispatch safety personnel to 10 major congested subway stations, including the Gangnam and Hongik University stations, and 10 transit stations platforms to guide passengers into standing apart while waiting for subways.

It will also operate more subway trains during rush hour to reduce the level of congestion.

With regard to buses, operations will return to normal Wednesday. The city government has so far reduced the operation of buses as people refrained from using them amid the coronavirus outbreak.

The move comes as the level of crowdedness in public transportation has been restored to some 80 to 90 percent of that recorded before the COVID-19 pandemic.

The South Korean government has switched to an “everyday life quarantine” scheme since last Wednesday to allow people to carry out social and economic activities under quarantine rules as new infections once fell to a single-digit figure.