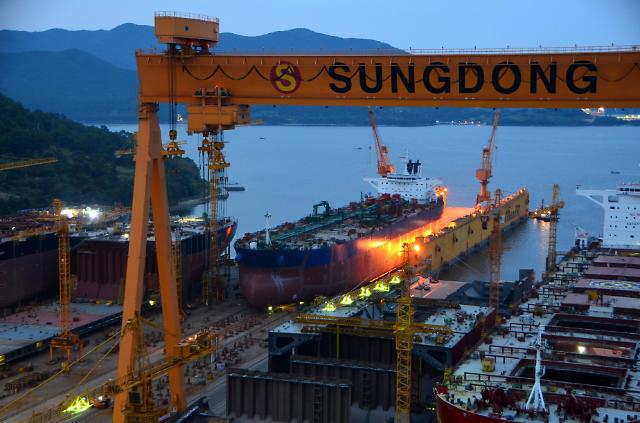 The two shipbuilders have been struggling with mounting losses as a slump in oil prices and the global economic downturn have sharply weakened demand for tankers and other vessels.

STX Shipbuilding, once the country’s No. 4 shipbuilder, was put under a court receivership in 2016.

The government and state-run creditor banks have put pressure on troubled shipbuilders to reform, urging them to carry out massive job cuts and other cost reduction measures.

The government decided to let Sungdong Shipbuilding file for a court receivership and asked STX Shipbuilding to present a “high-intensity restructuring plan” within a month.

If the management and labor union of STX Shipbuilding fail to agree on a restructuring plan within a month, Kim warned that the government “will deal with the shipbuilder in accordance with set rules.”

Sungdong Shipbuilding’s plant is located in the southern port city of Tongyeong.

During the meeting, the government also decided to pump 240 billion won into Tongyeong and Kunsan, which hosts GM Korea’s ailing plant, to help the two cities cope with job losses.

The funds will be used to waive or defer taxes for people who lost their jobs, support subcontractors and provide loans to smaller businesses in the two cities, the government said.