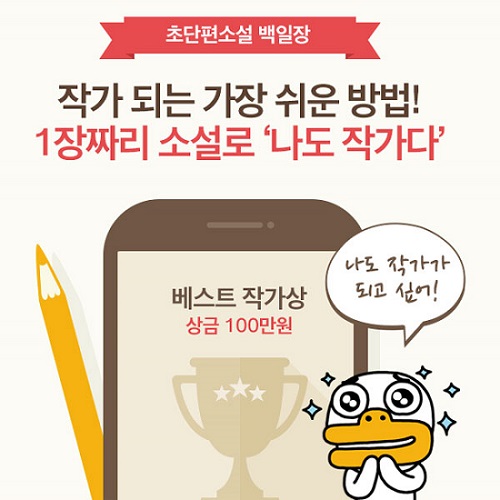 Regardless of genre, any kind of writing of less than an A4 page volume, or 2,000 characters of the Korean language, will be acceptable. (image: Daum Kakao)

Anyone who wants to become a writer can easily participate in the contest through their mobile devices as all the process from writing to applying to announcing winners is planned to take place on the KakaoPage mobile application.

Regardless of genre, any kind of writing of less than an A4 page volume, or 2,000 characters of the Korean language, will be acceptable. The contest is planned to be divided into two parts depending on its period: The first part will be run until November 15 while the second one is held until the 22th. Approximately 100 winners in each part will receive considerable rewards.

All the entries on the KakaoPage platform are judged by the jury and viewers. The jury will pick entries based on novelty, popularity and interest. The number of hits by the viewers is significantly considered as well.

The winner will receive the 1-million-won prize money and get an opportunity to publish his or her novel on the platform. Nine runners-up are going to earn the 300,000-won prize money.

“The Super Short Story Contest was devised to discover new writers in accordance with the ever-changing online environment. It is expected to give good opportunities to anyone who wants to be a writer as well as to viewers who want to appreciate fun and novel works,” an official of the company said.