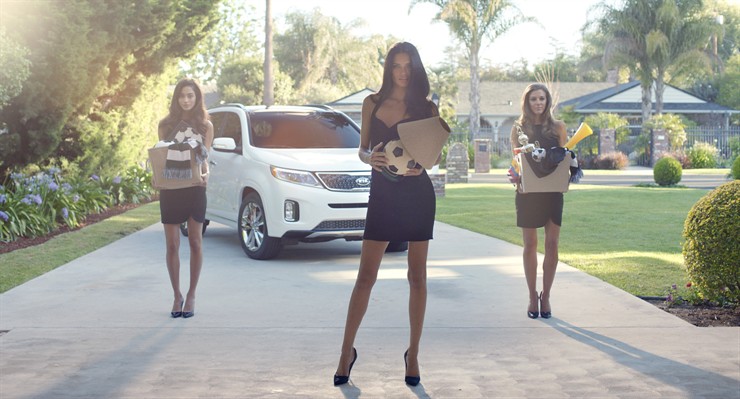 Kia Motors America is harnessing the energy and passion for 2014 FIFA World Cup Brazil for a dual-language marketing campaign titled “For One Month, Let’s All be Fútbol Fans.” (image credit: Kia Motors America)

IRVINE, Calif., Jun. 9 (Korea Bizwire) — The world’s most popular sport will take center stage during the 2014 FIFA World Cup Brazil™, and with viewership expected to reach new heights, Kia Motors America (KMA) is harnessing the energy and passion for the quadrennial event – and the star power of supermodel Adriana Lima – for a dual-language marketing campaign titled “For One Month, Let’s All be Fútbol Fans.” The initiative, which includes TV, print, digital, social, point-of-sale and radio components as well as Kia serving as the presenting sponsor of pre-match shows on ABC and ESPN, marks the second time the brand and Lima have teamed up following her memorable role in 2012’s “Drive the Dream” Super Bowl commercial.

In “For One Month, Let’s All be Fútbol Fans,” the 2015 Optima midsize sedan and Sorento CUV deliver Lima to a football field, a man cave and a local watering hole to whip non-soccer fans and gets them excited for the month-long World Cup. The three 30-second ads were created by David & Goliath and are available now for viewing at Kia.com/FIFA, and will make their broadcast debut when group play begins on June 12. Beyond the English- and Spanish-language versions of the spots, additional footage and content is available at Kia.com, and campaign extensions include elements on Facebook, Twitter, Instagram, Vine, Google+ and Pinterest.

“Soccer’s popularity in the U.S. is growing rapidly and as Official Automotive Partner of the World Cup we have a unique platform to showcase two of Kia’s most popular vehicles to the sport’s passionate and diverse fan base across the country,” said Michael Sprague, executive vice president of sales and marketing, KMA. “The reaction to Adriana Lima’s appearance in ‘Drive the Dream’ was overwhelming, and with the World Cup being staged in her home country of Brazil and her love for the game it was a natural fit to partner again and add a bit of glamour and humor to our ‘fútbol’ campaign.”

Kia Motors America (KMA) is the marketing and distribution arm of Kia Motors Corporation based in Seoul, South Korea.  KMA proudly serves as the “Official Automotive Partner” of the NBA and LPGA and surpassed the 500,000 annual sales mark for the second consecutive year in 2013 following the launch of seven all-new or significantly redesigned vehicles.   KMA offers a complete line of vehicles, including the rear-drive K900 flagship sedan, Cadenza premium sedan, Sorento CUV, Soul urban passenger vehicle, Sportage compact CUV, Optima midsize sedan, Optima Hybrid, the Forte compact sedan, Forte5 and Forte Koup, Rio and Rio 5-door sub-compacts and the Sedona midsize multi-purpose vehicle, through a network of more than 765 dealers across the United States.  Kia’s U.S. manufacturing plant in West Point, Georgia, builds the Optima and Sorento and is responsible for the creation of more than 14,000 plant and supplier jobs.