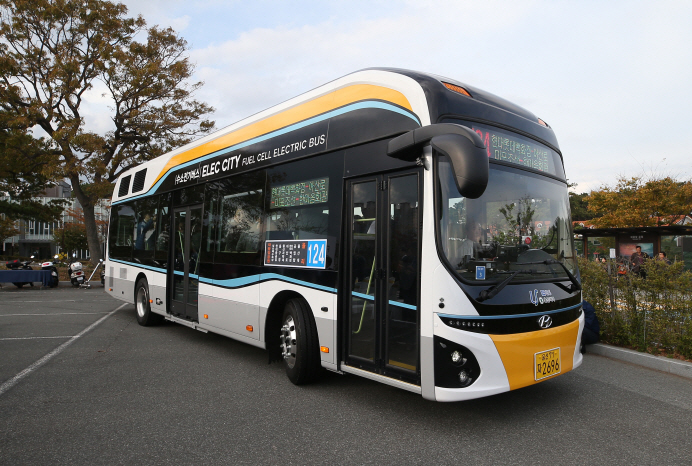 In the pilot project, the 30 environment-friendly hydrogen electric fuel cell buses will be used for public transportation in Seoul, Ulsan, Gwangju, Changwon, Seosan and Asan from March, Hyundai Motor said in a statement.

A total of 13 companies, including Hyundai, Korea Gas Corp. and Kolon Industries, Inc., signed an initial agreement to set up a 135 billion won (US$119 million) special purpose company (SPC), HyNet, for the establishment of hydrogen fuel stations.

As the first step, Hyundai Motor on Wednesday began a pilot program for hydrogen fuel cell buses in Seoul, following the launch of such a bus on a regular route in Ulsan last month.

The bus will operate five times a day for the next 10 months, being fueled at a hydrogen charging station near Hyundai’s headquarters in southern Seoul.

The Ministry of Trade, Industry and Energy said it will expand support to help develop advanced technology and infrastructure for the green vehicle.

“Driving the hydrogen bus on a real road would showcase the durability and safety of South Korea’s technology,” Industry minister Sung Yun-mo said in a boarding event. “We will cut regulations and cooperate with the SPC to expand the charging infrastructure.”

In the past decade, Hyundai has aggressively promoted hydrogen-powered passenger and commercial vehicles to take the lead in next-generation vehicle markets.

Currently, nine hydrogen charging stations are available to customers in Korea and two more will be added by the end of this year, far fewer than the 100 available in Japan.

In September, Hyundai signed a deal to supply 1,000 hydrogen-powered trucks to Europe for five years from 2019. The company aims to provide 5,000 hydrogen fuel cell electric passenger and commercial vehicles to France by 2025, the statement said.

McKinsey & Company forecast a total of 5 million hydrogen buses will be released in global markets by 2050. The South Korean government plans to make 1,000 hydrogen buses available on roads by 2022, it said.