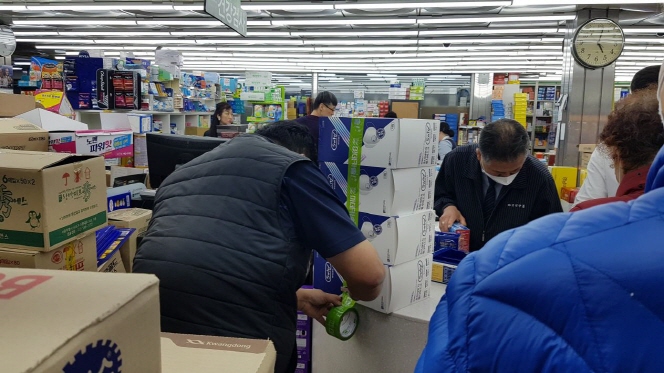 A staff member packages boxes of facial masks at a pharmacy in Jongno, central Seoul on Jan. 31, 2020, amid growing concerns about the spread of a new strain of coronavirus. (Yonhap)

SEOUL, Feb. 3 (Korea Bizwire) — The supply of facial masks has not met demand in South Korea, with some industry watchers blaming Chinese tourists and merchants for going on a buying binge here to protect themselves from a new coronavirus.

South Korea is not an exception to the global phenomenon of people buying face masks to prevent infection from a new strain of coronavirus.

It is increasingly difficult to purchase masks with good filtering features either online or at brick-and-mortar stores and pharmacies.

Concerns about the spread of the virus have deepened, with South Korea having reported 15 cases of the new coronavirus so far.

As prices of facial masks shot up here, online merchants have canceled orders placed when the masks were cheaper in order to increase their margins, sparking complaints from consumers.

Pharmacies saw their stockpiles of products with better filtering capabilities, such as KF94- or KF99-standard masks, becoming depleted.

“We cannot sell KF94 masks as supply does not meet demand,” said a staff member at a pharmacy in Jongno, central Seoul. “It is hard to secure inventory of such masks even if we paid more money.”

As word of South Korean masks having good quality has spread, demand for such products among the Chinese appears to have increased.

“One Chinese tourist purchased boxes of masks at 4 to 5 million won. Considering each box has around 900 masks, he bought four to five boxes,” said an official at a pharmacy in Myeongdong, a shopping district in downtown Seoul.

“After the Lunar New Year holiday, the number of people sending boxes of masks to China has increased,” said an official at a post office in Mapo Ward, western Seoul.

The official said in most cases, Chinese people residing in South Korea are sending masks to their relatives or friends in China. 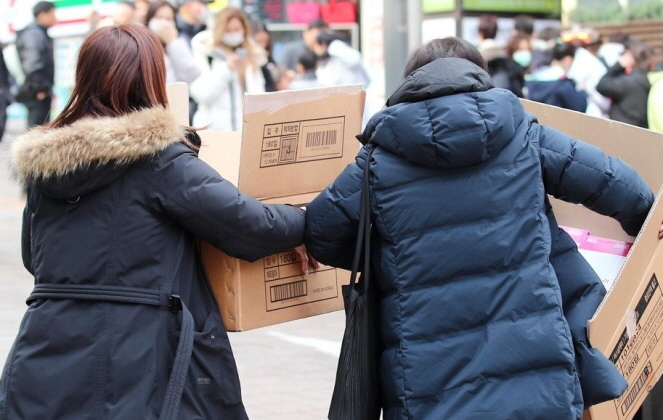 A group of Chinese visitors carry boxes of face masks purchased from a drug store in Myeongdong, central Seoul, on Jan. 31, 2020. (Yonhap)

Some Chinese merchants are selling Korean face masks at a sharply higher prices after buying them in massive numbers.

On Korean social media sites, South Koreans are not hiding their complaints about some Chinese people’s practice of selling Korean masks at a higher price, as it seems to be the main culprit in soaring mask prices here.

Seoul police said they will look into possible price-rigging of face masks.

“There is no investigation underway (into possible mask hoarding). If the situation gets worse, we will launch probes by asking related government agencies to file a complaint,” a Seoul Metropolitan Police Agency official told reporters.

The finance minister can designate a list of products that are subject to a ban on hoarding in anticipation of higher prices.

Those who stock up such items could face up to two years in prison and a maximum of 50 million won in fines.

The finance ministry plans to announce a list of banned hoarding goods over the new coronavirus, including face masks, this week in an effort to crack down on excessive stockpiles.