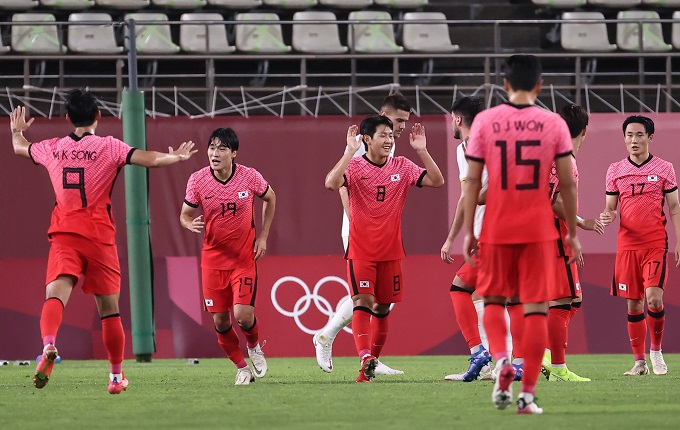 Lee Kang-in (C), a midfielder of South Korea’s men’s football squad, celebrates with his teammates after scoring the team’s fourth goal during a Group B match against Romania at the Tokyo Olympics on July 25, 2021, in Kashima, some 110 kilometers northeast of Tokyo. South Korea won the match 4-0. (Yonhap)

The group round match of the South Korean men’s football team against Romania on July 25 marked a combined 33 percent in viewership, according to Nielson Korea.

It was aired simultaneously by three terrestrial TV networks — KBS, MBC and SBS — and labeled as the highest-rated Olympic live broadcast program over the Tokyo Olympics that kicked off July 23.

The Korea-Romania match drew media attention as South Korea lost to New Zealand 1-0 in the opener three days earlier. South Korea beat the European country 4-0 and jumped to the top of Group B in men’s football.

The viewership of South Korea’s last group round match against Honduras on Wednesday reached 26.2 percent as the country pulled off a 6-0 victory to secure a ticket for the quarterfinals as the Group B leader.

Saturday’s quarterfinal between South Korea and Mexico marked 25.5 percent although the former was routed 6-3 to get knocked out of the Olympic competition.

Fencing, from which South Korean has earned four medals, including one gold, in Tokyo, was as popular as football in terms of TV viewership rates.

The live broadcasting of the gold medal match of the men’s sabre team fencing between South Korea and Italy on Wednesday logged a viewership of 25.1 percent.

The team of Kim Jung-hwan, Gu Bon-gil, Oh Sang-uk and Kim Jun-ho, nicknamed “Avengers” by Korean fans, routed the Italians 45-26 in the finals to win the country’s second straight gold in the team event at the Olympics. 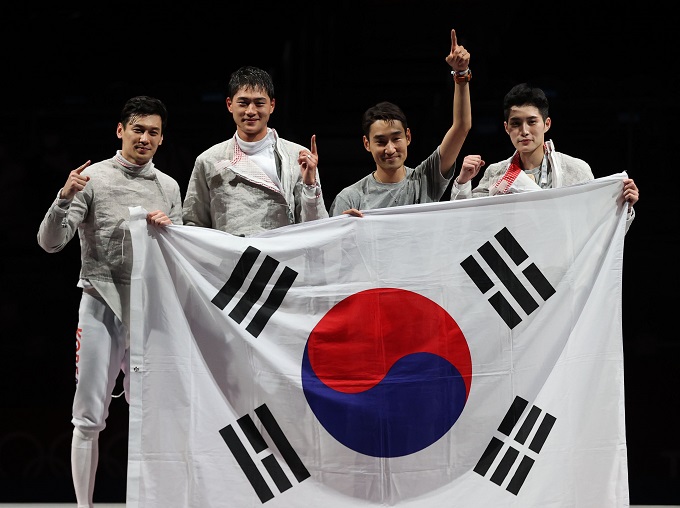 South Korean fencers Gu Bon-gil, Oh Sang-uk, Kim Jung-hwan and Kim Jun-ho (L to R) celebrate their victory over Italy in the final of the men’s team sabre fencing event at the Tokyo Olympics at Makuhari Messe Hall B in Chiba, Japan, on July 28, 2021. (Yonhap)

The unrivaled dominance of South Korea’s archery at Tokyo also caught the eyes of fans here.

The viewership of the women’s individual finals on Friday reached 22.5 percent as people focused on the moment that An San brought home her third gold medal at the Olympics, following ones in previous mixed and women’s team events.

The overwhelming performances by South Korean male archers in the team event final on July 26 drew a viewership of 20.9 percent.

The team of Kim Je-deok, Kim Woo-jin and Oh Jin-hyek hit the bull’s-eye 13 times out of 18 shots against the Taiwanese.

On top of that, South Koreans also paid huge attention to other individual events like artistic gymnastics and athletics.

The broadcasting of the women’s vault final marked a combined viewership of 28 percent Sunday as gymnast Yeo Seo-jeong finished third with a score of 14.733 points.

She became the first South Korean female gymnast to win an Olympic medal and the second member of her gymnastics family to stand on the podium, following her father, Yeo Hong-chul, who won silver in the men’s vault in 1996.

The history-making performance in the men’s high jump final by Woo Sang-hyeok, which was aired by KBS, posted a viewership of 19.2 percent Sunday.

It outnumbered the 16.6 percent for South Korea’s baseball match against the Dominican Republic aired at the same time.

He cleared 2.35 meters to break the 24-year-old Korean record and finished fourth to become the first South Korean track and field athlete to achieve the feat.