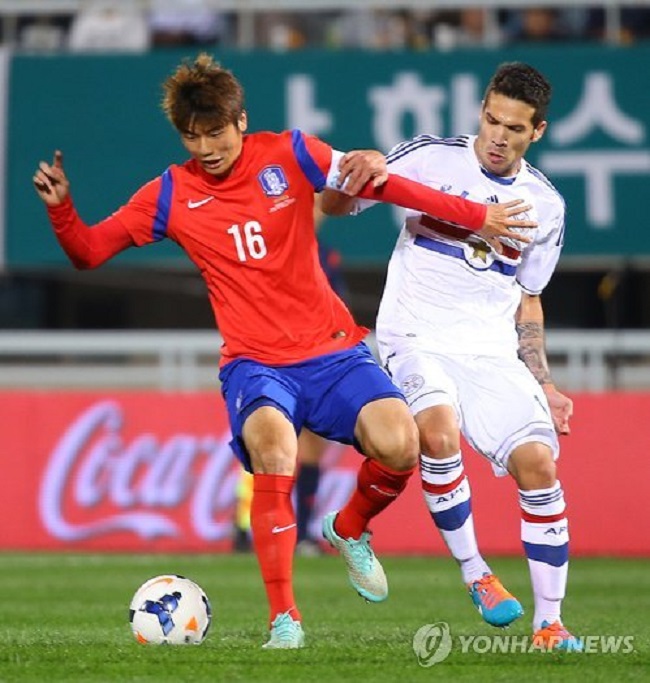 Ki said South Korea should not be too pressured about current status, but just concentrate on the next match. (Image: Yonhap)

Ki arrived home early Friday to join South Korea’s training at the National Football Center in Paju, north of Seoul, where the national players have been training for the upcoming World Cup qualifiers. South Korea are scheduled to host Iran next Thursday before taking on Uzbekistan in Tashkent on Sept. 5.

Ki went under the knife on his right knee in June after South Korea’s World Cup qualifier against Qatar in Doha, where the national team suffered a 3-2 loss. He was originally scheduled to join the national team next Monday along with other Europe-based players, but Ki said he was able to come to the NFC early after getting Swansea’s approval.

“I had to take examination after my surgery and, since I wasn’t able to play for my club anyway, Swansea allowed me to join the national team early,” Ki said to reporters at the NFC. “I’m getting better and recovering faster than I thought.”

Ki said his surgery was not just about clearing the inflammation in his right knee, but also included tendon repair and necrotic tissue removal.

“The surgery got bigger than I thought, but it went well,” he said. “It was mentally good for me to know how much I have recovered from surgery. Since I’ve been a player for Swansea for five years, we trust each other and there was no big problem for me to come here early.”

Swansea previously announced that Ki will be available from mid-September. When asked about whether he can play in the World Cup qualifiers, Ki said that’s up to head coach Shin Tae-yong.

“My goal is to build up my form in the time I have,” he said. “I don’t worry about my stamina, but what I’m actually concerned about is my feel for the game because I haven’t played matches for a while.”

Shin, who was appointed in July after Uli Stielike was sacked, said he picked Ki because he will be helpful to the national team even if the the 28-year-old can’t play.

“I feel grateful that the coach has such faith in me,” Ki said. “Whether I play or not, I’m ready to help the team and that’s why I came here.”

Ki wore a captain’s armband during Stielike’s era, but with the arrival of the new head coach and selection of veterans such as 38-year-old striker Lee Dong-gook and 34-year-old winger Yeom Ki-hun, it’s uncertain whether Ki can still maintain his captaincy. The former Celtic player said he doesn’t know who will be the captain, but what’s certain is that the veteran players are actually making the team better.

“I’m desperate for the World Cup and I feel responsibility, so there are still many things that I can do for this team,” he said. “The veteran players’ experience and their strong will to stay competitive can motivate our players and keep the good atmosphere alive.”

Ki, who has 93 caps for South Korea with 10 goals, said he believes the national team will collect good results with or without him.

“Everything has changed with the new coach’s arrival, and the players have a different mindset,” he said. “Whether I play or not, the players are motivated, so they will do fine.”

In Asia, only the top two teams in each group can directly advance to the World Cup, but South Korea are barely holding on to the last qualification spot in Group A with 13 points, just one above Uzbekistan. Iran have already secured their spot at the World Cup in Russia after collecting 20 points in eight matches.

Ki said South Korea should not be too pressured about current status, but just concentrate on the next match.

“We’re not really in a bad situation,” he said. “We’re still leading Uzbekistan, and we just have to realize what our goal is. If the players know what their role is for this team, then we’ll be able to get through this situation.”

Ki said his surgery was not just about clearing the inflammation in his right knee, but also included tendon repair and necrotic tissue removal. (Image: Yonhap)