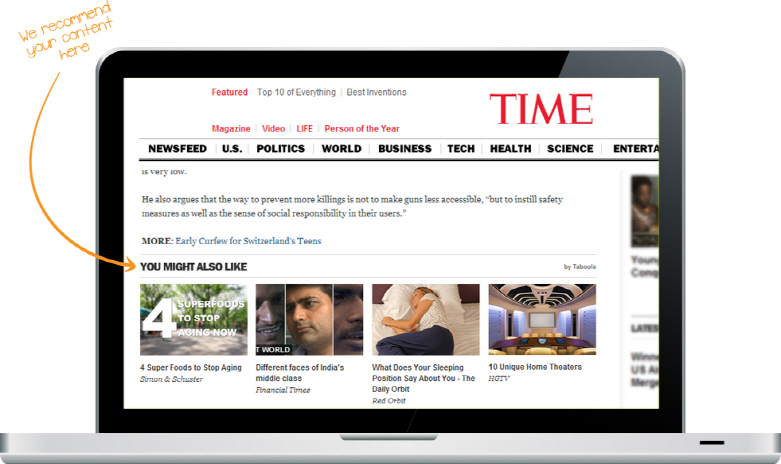 NEW YORK and LONDON and SÃO PAULO, Brazil and BANGKOK, Thailand, Dec. 3 (Korea Bizwire) — Taboola, the leading global discovery platform, announced today that it now reaches 639.5 million unique global Internet users on desktops, more than any other distributed content network in the world, according to comScore, a global leader in digital measurement and analytics. comScore’s findings were reported in monthly rankings of Distributed Content for October 2015. This announcement comes a little over one year after Taboola made news for its landmark achievement of reaching more U.S. desktop users than Facebook, Yahoo, and others.

For the first time, Taboola is also sharing its click data, announcing a monumental achievement of crossing the 1.15 billion clicks per month threshold, proving that the quality and engagement of consumers around the world is extremely high when surfaced with personalized content recommendations.

“October’s comScore data is a huge milestone for us given the company-wide emphasis we put on international markets, bringing personalization to people everywhere around the world. We now operate in countries such as Japan, China, Korea, Germany, UK, France, Brazil and many others,” said Adam Singolda, founder and CEO of Taboola. “We are extremely excited to continue to provide brands, publishers, and marketers with the most effective, ROI-driven discovery and native advertising solution on the market, with millions of people choosing to engage with Taboola over a billion times a month. This market we call Discovery is the next generation of search in its yield and user engagement, only instead of people looking for content – content looks for people.”

Today’s announcement comes after several months of international growth, including the formation of strategic partnerships with Baidu, Gruppo Editoriale L’Espresso, Yahoo! JAPAN, and InMobi, among others. Taboola currently serves over 300 billion recommendations to over 750 million unique visitors every month across the Web and in mobile apps.

About Taboola
Taboola is the leading discovery platform, serving over 300 billion recommendations to over 750 million unique visitors every month on some of the Web’s most innovative publisher sites, including USA TODAY, Business Insider, Chicago Tribune, and The Weather Channel. Headquartered in New York City, Taboola also has offices in Pasadena, London, Tel Aviv, New Delhi, São Paulo, and Bangkok. Publishers, marketers, and agencies leverage Taboola to retain users on their sites, monetize their traffic, and distribute their content to drive high-quality audiences. Learn more at www.taboola.com and follow @taboola on Twitter.