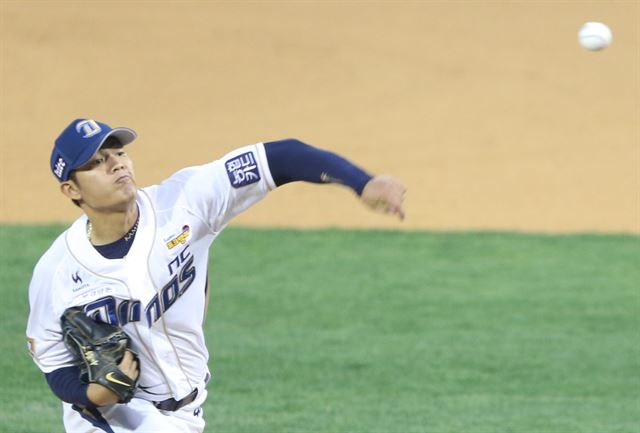 CHANGWON, Apr. 27 (Korea Bizwire) — The city of Changwon in South Gyeongsang Province has fallen head over heels in love with the new Taiwanese import for the NC Dinos, the city’s professional baseball team.

City officials revealed plans to appoint Wang Wei-chung as the city’s goodwill ambassador at the NC Dinos’ home game to be held on Sunday.

Changwon has been aggressively wooing Taiwanese tourists to the city after Wang joined the NC Dinos. The city signed a friendly agreement with the Taiwanese city of Taichung earlier in the month during an NC Dinos’ home game in which Wang was the starting pitcher.

Changwon signed MOUs with the NC Dinos and Air Busan in early April to attract more Taiwanese tourists to the city. According to the MOU, NC Dinos will provide Taiwanese tourists with a photo op on the stadium’s playing surface and display welcoming messages on the electronic scoreboard.

Taiwanese tourists will also be offered a special discount upon purchasing souvenirs. Air Busan will be offering flight promotions while trying to attract visitors via its Taiwanese branch.

Wang Wei-chung is the first Taiwanese baseball player to join the Korea Baseball Organization since its inception in 1982. Wang currently ranks fourth in ERA and 12th in total victories.