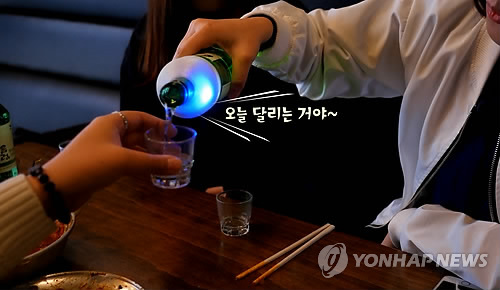 The new device is also a mood raiser, as it works with an app designed to provide fun games using the sensor. (image: Yonhap)

SEOUL, March 31 (Korea Bizwire) — A smart sensor that a drink bottle can ‘wear’ and a wristband device that wakes up sleepyheads are being presented to the public at the ‘Innovative & Creative Show,’ a convention for small digital companies held by Daehong Communications.

Daehong Communications has helped several newly formed companies debut at its convention, which has been in planning for over a year. One company’s ‘wearable’ for a bottle of soju, a popular alcoholic beverage for Koreans, is a smart sensor that detects human motions exerted upon the bottle, and then analyzes the quantity of alcohol remaining and its rate of consumption by calculating the bottle’s tilt over time.

The new device is also a mood raiser, as it works with an app designed to provide fun games using the sensor. Various voice files can also be played by the sensor, which makes it a perfect medium for advertising.

Hot Band is a wrist wearable developed by the Korea Institute of Design Promotion, which detects human brainwaves to wake a user up when needed. The wearable showed its advertising potential as it was used for energy drink brand Hot Six’s campaign at the convention. A digital music instrument played by humans sitting on restaurant chairs was also presented as an excellent advertising medium, with Korean fast food chain Lotteria launching a promotion using the digital music system.

A virtual clothes-fitting screen employed to promote Uniqlo, and a robot dancing to a Lotte Confectionery commercial theme song also attracted viewers at the convention.

The company is also aiming to form a mutual growth relationship with small digital companies, and is ambitiously transforming into a hub company linking digital products, services and product suppliers and customers.