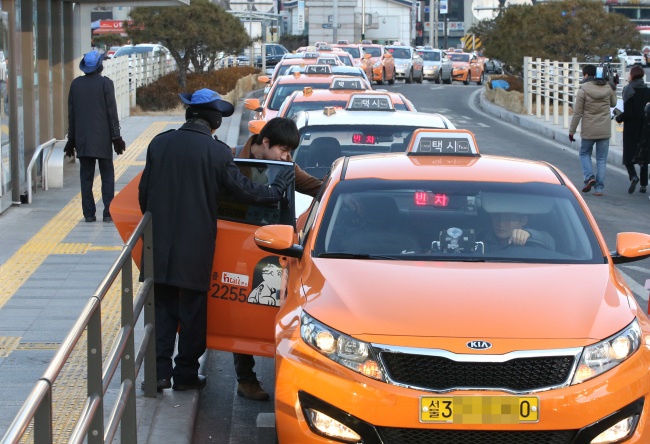 A passenger boards a taxi in Seoul in this file photo. (Yonhap)

SEOUL, Jan. 27 (Korea Bizwire) — Taxi sharing, banned in South Korea for the past four decades, will be revived in a new way in Seoul this week thanks to the development of IT technology, the city government said Thursday.

The Seoul government said cab ride-sharing services can be offered legally in the capital starting Friday, when a revision of the taxi industry development law approved last July takes effect.

A taxi platform called “Banban (half-and-half) Taxi” will offer the taxi sharing services for its users who select a shared ride call in its smartphone app.

It automatically matches users whose routes overlap at least 70 percent. The fare is also automatically calculated in proportion to the distance traveled.

The Banban Taxi service has been operated on a pilot basis in parts of Seoul since 2019.

Taxi sharing was common in the 1970s, allowing drivers to take strangers at will, regardless of their intentions, to increase fare income.

But the practice was banned in 1982 due to problems, such as frequent vehicle stops and fare disputes.

“Under the taxi sharing service, people, not drivers, will have the right to ride together. It is expected that limited taxi resources can be used efficiently and passenger convenience can be increased,” said a city government official.

The government said some passenger safety measures have been prepared to reduce the anxiety of riding with strangers and the fear of crimes.

Only passengers of the same gender are allowed to ride together and users can sign up for the app only with their real name and pay the fare only with their own credit cards.