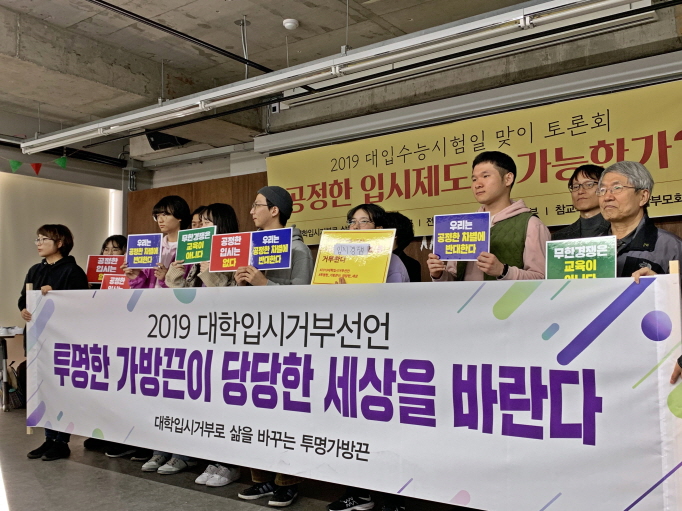 A civic group held a press conference in Seoul on Nov. 14, 2019 where six protesters including teenagers and high school students publicly declared that they would reject college entrance examinations. (Yonhap)

‘The Hidden Bag for Change by Rejecting College Entrance Examinations,’ a student organization, held a press conference in Seoul where six protesters including teenagers and high school students publicly declared that they would reject college entrance examinations.

The organization, established in 2011, has been opposing the competitive school environment that focuses exclusively on college entrance and employment, calling for a world without discrimination against those who choose not to go to college.

“We want to live a life that doesn’t force us to the cliff of college entrance examinations and that doesn’t make us anxious for not going to university,” said one female protester.

Another male protester who graduated from an unaccredited alternative school criticized the current education system, arguing that “the current system that encourages cliques, and divides losers from winners, has got to change.”

The organization held a debate session with the National Union of Educational Workers to address the question of creating a fair college entrance system.

Kim Tae-hoon, vice commissioner for the World without Worries about Shadow Education, called for new legislation to resolve college stratification and employment discrimination based on education.