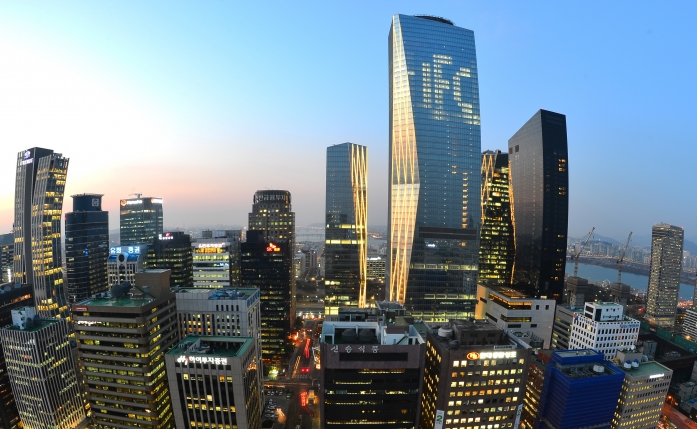 Mobile carriers have joined hands with financial firms to develop new services based on such user data to boost their non-mobile business.

The two companies agreed to merge their pseudonymized user data to develop more accurate tourism information, such as most visited destinations, establishments users spend the most at and most-used mobile applications.

The telecom operator will merge its base station access data with Shinhan Card’s credit card transaction data to analyze tourist spending habits in the southern port city of Busan, according to the Financial Security Institute.

The two companies said they plan to provide the analyzed data to regional governments to boost tourism amid the pandemic, and expand cooperation in other sectors such as retail. 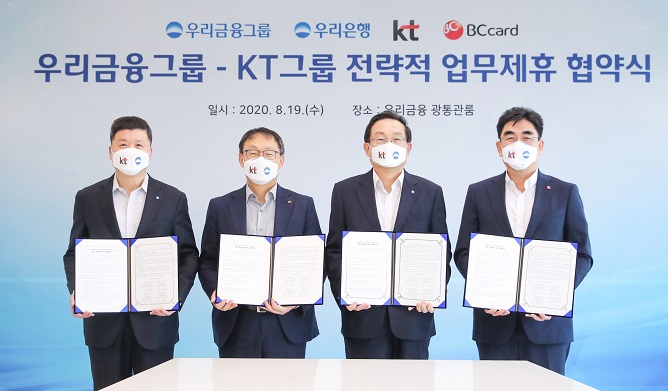 KT Corp. CEO Koo Hyun-mo (2nd from L) and Woori Financial Group CEO Sohn Tae-seung (3rd from L) pose for a camera after signing an agreement to cooperate in data-based services at Woori Bank’s headquarters in central Seoul on Aug. 19, 2020, in this photo provided by KT.

Earlier this week, telecom giant KT Corp. joined hands with Woori Financial Group to develop new financial and telecommunication products that better cater to user needs based on their data.

The two firms, which hold major stakes in internet-only bank K-Bank through subsidiaries, have also agreed to collaborate in artificial-intelligence and cloud-based services.

The mobile carrier has also partnered with LG Group’s IT services affiliate LG CNS and the Financial Security Institute for similar data-based collaborations.

Amid the data drive from telecom operators, civic groups, including the progressive People’s Solidarity for Participatory Democracy, have expressed concerns over potential misuse of personal data for commercial purposes.

South Korea has launched the Personal Information Protection Commission to monitor such violations.