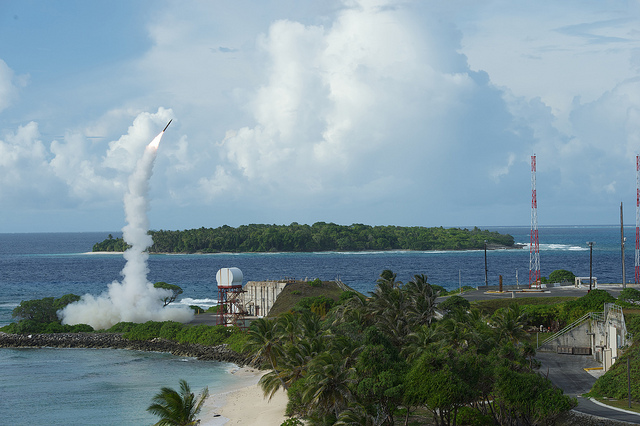 Washington has recently hinted at the deployment of a battery on Korean soil to better deter the North’s growing nuclear and missile threats. (image: U.S. Missile Defense Agency/flickr)

SEOUL, March 15 (Korea Bizwire) – The United States has included its advanced missile-defense system as part of the support it would provide South Korea in emergency situations on the Korean Peninsula, a South Korean military source said Sunday.

“The U.S. plans to deploy a Terminal High-Altitude Area Defense (THAAD) in case of an emergency on the Korean Peninsula,” a military source told Yonhap News Agency. “My understanding is that THAAD is easily transportable with a U.S. military aircraft.”

Washington has recently hinted at the deployment of a battery on Korean soil to better deter the North’s growing nuclear and missile threats. The U.S. stations about 28,500 troops in South Korea, a legacy of the 1950-53 Korean War, which is technically ongoing since no peace treaty has been signed to end it.

The issue of whether or not South Korea should host the American missile defense system has caused a bipartisan divide in local politics. While conservatives support the system, the liberal side has not been so welcoming since it believes the U.S. presence here undermines South Korean sovereignty. The U.S., meanwhile, claims the battery is defensive in nature.

THAAD can shoot down a wide variety of ballistic missiles at higher altitudes than any other defense system owned by South Korea.

South Korea has yet to decide whether to allow the U.S. to deploy THAAD here at all times and has maintained strategic ambiguity to appease China.

Sources within the South Korean government also said Seoul has no intention to shoulder any of the cost involved in stationing THAAD on local soil.

South Korea also says it opposes the U.S. deployment of AN/TPY-2, an early missile warning system that detects missiles up to 2,000 kilometers away, which would include China’s military facilities.

“Our military has our own missile warning system, the Green Pine, which has a range of 600 km, so we don’t need AN/TPY-2,” a source within the South Korean government said.