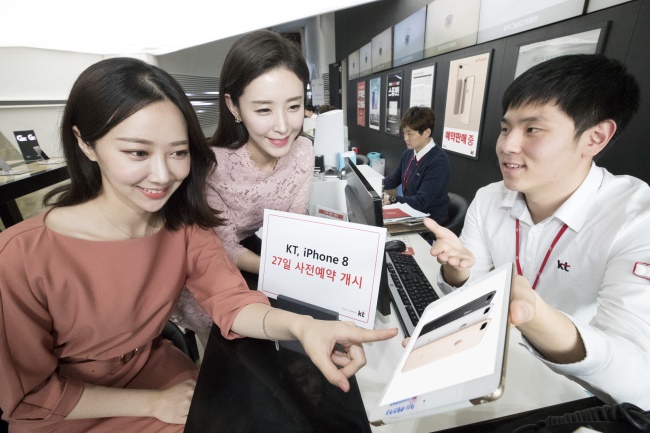 With some branding the sales performance in countries where the new iPhone was already released as ‘below expectations’, industry experts believe the preorder performance will determine the success of the iPhone 8 in South Korea. (Image: KT)

With some branding the sales performance in countries where the new iPhone was already released as ‘below expectations’, industry experts believe the preorder performance will determine the success of the iPhone 8 in South Korea.

According to sources close to the South Korean mobile industry, the iPhone 8 and iPhone 8 Plus will be released with memory capacities of 64GB and 256GB in three different colors including space gray, silver and gold.

Though the official market price for South Korean consumers has yet to be revealed, industry experts speculate the price for an iPhone 8 with 64GB of memory will be around 930,000 won, while the 256GB model is expected to be priced at around 1,140,000 won.

KT is accepting orders at both its offline and online stores, as well as through the KT Shop app. KT users who wish to change their mobile to the latest iPhone can simply make a reservation by sending a text to ‘##7878′ stating the desired model, memory capacity, and color.

SK Telecom and LG Uplus are also accepting preorders at both online and offline stores, as well as through the popular messaging app KakaoTalk.

While some stores have already begun putting customers on a waiting list, inside sources allege that iPhone 8 preorders are underperforming compared to the iPhone 7.

“The number of preorder applicants (for the iPhone 8) is smaller than that for the iPhone 7. Given the concerns over battery issues and interest in the release of the high-end iPhone X, many consumers seem to be taking a backseat and have chosen to wait and see for the time being,” an industry source said.

Amid growing concerns over battery issues surrounding the iPhone 8, the Korea Mobile Distributors Association issued a statement in which it criticized the government and mobile carriers over the lack of guidelines and measures for compensation, while urging Apple to address the battery issue.