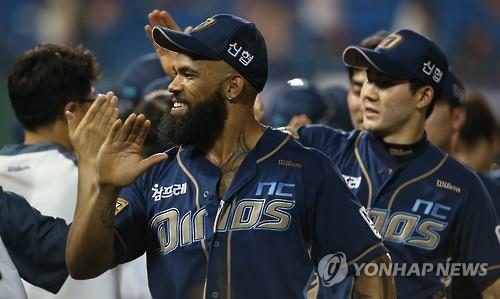 Eric Thames of the NC Dinos celebrates a victory with his teammates in Seoul on July 10, 2015. (Image: Yonhap)

SEOUL, July 17 (Korea Bizwire) — As the first half of the 2015 Korea Baseball Organization (KBO) season drew to a close Thursday night, two of the league’s premier sluggers, Park Byung-ho of the Nexen Heroes and Eric Thames of the NC Dinos, were locked in an exciting duel for the home run title.

Park and Thames were tied at 28 homers apiece after each hit one out Tuesday, before Park hit two more over the next two days.

With his 30th homer Thursday, Park became only the third KBO player to hit 30 homers or more in four straight years. He’s also the first player to reach No. 30 before the All-Star break in two consecutive seasons.

Park will eye another piece of history at the season’s end and try to become the first player to lead the KBO in home runs for four straight seasons. He had 31 in 2012, 37 in 2013 and a career-high 52 last year.

Not to be outdone, Thames, a onetime major leaguer, has put together a monstrous season himself. Along with his 28 long balls, the American has stolen 21 bases. He reached the 20-20 plateau in home runs and steals in just 73 games, making him the third-fastest player to do so.

Park has won two of the past three MVPs in the league, but if the season ended Friday, Thames may have an inside track to the trophy this year.

Thames’ Dinos are in third place, only 1.5 games behind the first-place Samsung Lions, while the Heroes trail the Dinos by 2.5 games in fourth place.

The two sluggers’ duel is reminiscent of the historic home run record chase in 2003. Lee Seung-yuop of the Lions and Shim Chong-soo of the now-defunct Hyundai Unicorns went toe-to-toe from start to finish, before Lee finished with the KBO’s single-season record of 56 and Shim fell short by three home runs.

It remains the only KBO season in which two players hit more than 50 homers.

This year, Park has played in each of the Heroes’ 86 games and has 58 games remaining. Thames has appeared in 79 of the Dinos’ 82 games, and the club has 62 games left on the calendar.

The two will resume their chase Tuesday.