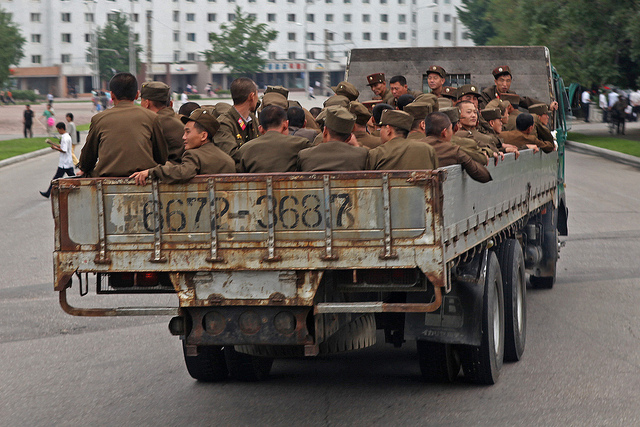 Rumors of dissatisfaction and conflict among North Korean soldiers are not uncommon. But stories of discontent with the rule of the current leader have grown more prevalent in recent years from both inside sources and North Korean defectors. (image: Flickr/ Roman Harak)

SEOUL, Aug. 9 (Korea Bizwire) – Only North Korea can deny that poverty and famine have swept across its population: the painful reality is that hardship even affects North Korean soldiers, who are portrayed on state TV as being brave and valiant.

According to local sources from Daily NK on Monday, the North Korean military has been having difficulty rationing meals to its enlisted soldiers, with some now only receiving about 30 percent (70 grams) of a meal’s recommended portion.

“The regulation ration is 250 grams, but this standard is rarely followed,” said the source. “Rations differ depending on the unit – 150 grams, 100 grams, or even 70 grams. Soldiers are even complaining, saying the meals only amount to ‘two spoonfuls’”.

According to Daily NK, despite North Korea prioritizing food for the military over its civilian population, widespread corruption means that meal priority is given to commissioned officers, leaving enlisted soldiers hungry.

“There’s no such thing as desserts,” the source added. “So hungry soldiers survive off berries they pick up on mountain trails. I’ve even heard of a sadistic commander who ordered his entire battalion to pick 3 kilograms of berries per person.”

Meanwhile, another source also noted that the livelihood of commissioned officers has also deteriorated, and more conflicts are arising due to strict policies set by current leader Kim Jong-un.

According to the source, a company commander’s mother and his daughter were murdered in a terrifying incident last month by a North Korea-China border patrol brigade.

“Smuggling of goods has been subject to strict control in recent months, and this has driven the brigade’s officers to sell enlisted soldiers’ clothing and food to save up for their retirement,” said a source to Daily NK. “The company commander publicly denounced one of the officers responsible and humiliated him in front of soldiers. The incident pushed him to commit such a crime.”

Rumors of dissatisfaction and conflict among North Korean soldiers are not uncommon. But stories of discontent with the rule of the current leader have grown more prevalent in recent years from both inside sources and North Korean defectors. Kim Jong-un’s continuous expulsion of top military and government personnel, including the execution of his own uncle, Jang Sun-taek, is also believed to be generating instability in the country’s military structure.

North Korea currently has about 1.2 million active military personnel with 7.7 million reserves, totaling more than one third of its entire population. The mandatory military service period for North Korean soldiers is 10 years.