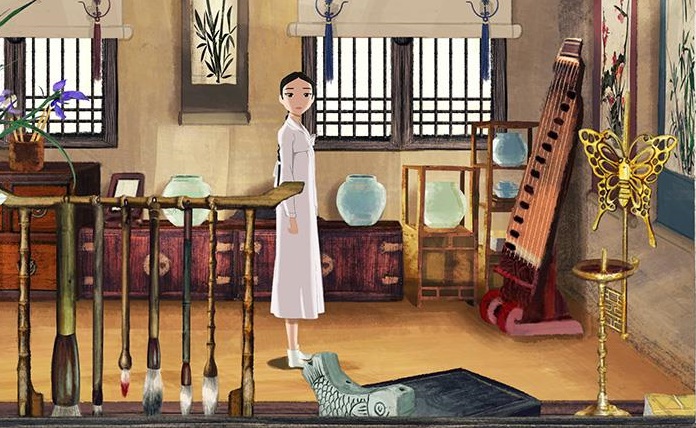 A scene from “The Shaman Sorceress” captured from the homepage of the Annecy International Animation Film Festival. (Yonhap)

Director Ahn Jae-huun’s feature received the Contrechamp Jury Distinction prize at the festival that kicked off on June 15 and runs through June 30.

The film was nominated in the Contrechamp competition category for feature films along with nine others, including another South Korean animated film, “Beauty Water” by Cho Kyung-hun.

The section was inaugurated in 2018 to showcase unique full-length films.

“The world has enjoyed the festival in its respective countries and places due to the coronavirus crisis,” Ahn said in an online message uploaded on the event’s website.

“‘The Shaman Sorceress’ is a musical with distinct Korean features. We look forward to seeing all of you in theaters and sincerely hope for the day when we will be able to remember every visitor.”

“The Shaman Sorceress,” an adaptation of a Korean novel with the same title, portrays the breakup of a traditional family after a religious clash between shamanism and Christianity.

Mo-hwa, a shaman who has practiced shamanism her entire life, falls into a conflict with her son Wook-yi, who returns home as a converted Christian. The generational and religious struggle leads the family into tragedy.

“The Shaman Sorceress” is expected to hit South Korean screens in the latter half of this year.

Director Ahn Jae-hunn is the first South Korean filmmaker to make it to the competition section of the Annecy Film Festival twice. His hand-drawn animated film “Green Days: Dinosaur and I” was invited to the festival in 2011.

Launched in 1960, the Annecy festival is one of the highest-profile animation events in the world. Its 2020 edition is being held online due to the COVID-19 pandemic.