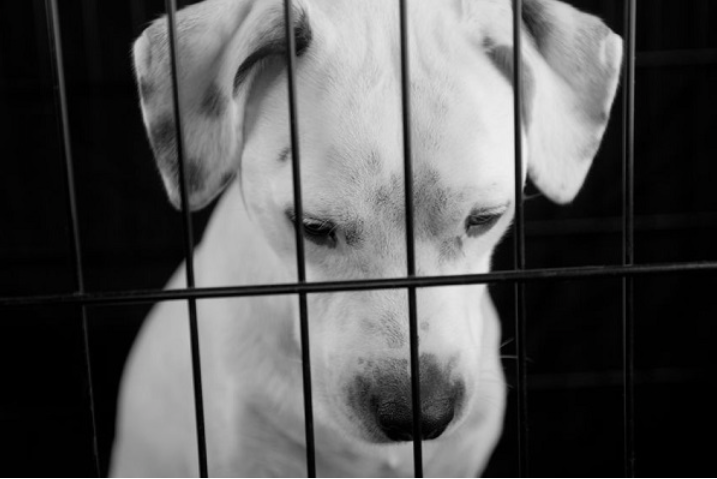 Dog breeders are legally obliged to declare their property when its area exceeds 60m2. As of April, the number of declared farms stood at 2,692. And although this figure includes both types of dog farms, the figure would likely exceed 5,000 once undeclared farms are also taken into account. (image: KobizMedia/ Korea Bizwire)

SEOUL, May 28 (Korea Bizwire) – Amid escalating controversy over animal cruelty at Korea’s dog breeding farms, also referred to locally as ‘dog factories’, the overall state of maintenance and supervision of such farms is facing wide criticism.

Responsible organizations have taken a hands-off approach to the supervision of dog farms, invariably citing ‘lack of manpower’ as an excuse. Even if animal cruelty is reported and exposed, current animal protection laws are too broad and ambiguous to resolve the fundamental issues at hand.

There are typically two types of dog breeding farms in Korea: ones in which dogs are produced as pets, and others in which they’re raised for human consumption.

According to the Ministry of Agriculture, Food and Rural Affairs (MAFRA), there are currently 187 declared breeding farms in Korea. However, the ministry admits that there could be as many as 1,000 additional undeclared farms. But this only applies to farms that produce pet dogs. The number more than doubles when farms that breed dogs for food are taken into consideration.

Dog breeders are legally obliged to declare their property when its area exceeds 60m2. As of April, the number of declared farms stood at 2,692. And although this figure includes both types of dog farms, the figure would likely exceed 5,000 once undeclared farms are also taken into account.

The number of such farms has increased exponentially in recent years with the fast-growing market for domestic animals. And it is impossible to solely rely on government authorities to properly manage and supervise all of the dog farms across the country.

There are only two MAFRA employees tasked with running the organization’s entire animal welfare operations. The same applies to local governments, which typically only designate one or two employees to supervise designated dog farms and their activities. 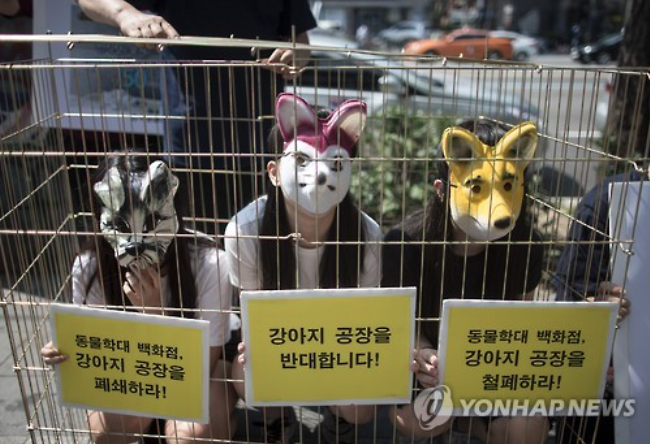 Currently, dog farms only need to declare themselves to local governments. But just four years ago, they had to be registered and approved by the authorities, who issued official certificates for their operation.

However, with the intention of enticing unlicensed businesses to legitimize their operations, the government decided to relax its regulations. The loosening of these laws did not help to reduce the number of unlicensed farms – on the contrary, illegal operations thrived even more.

Weak and ambiguous legal ramifications do little to dissuade ongoing animal cruelty and the unhygienic operation of dog farms.

The penalty for operating an unlicensed breeding farm is less than 1 million won ($847). It’s an amount most farmers would easily risk, and they would rather pay the penalty than face regular property visits from inspectors.

Animal cruelty that takes place on the farms is also difficult to penalize by law. Current animal protection legislation obliges farm owners to meet certain environmental standards, and feed their animals with proper food and water. Farm owners who violate the law can face punishment of up to one year in prison, or a fine of 10 million won.

However, it is difficult to make the charges stick in most cases, and owners are rarely prosecuted, at least not for animal rights violations.

Ironically, many owners face sanctions for other legal violations. A dog farm owner referred to only as Kim bred 300 dogs by forcefully impregnating females and using illegal narcotics to perform cesarean sections. She was charged not with animal cruelty, but for possession of illegal medication.

As such, farm owners that maintain unhygienic environments are punished for violating livestock excretion laws, and those who feed dogs food waste are punished for breaking waste management laws. 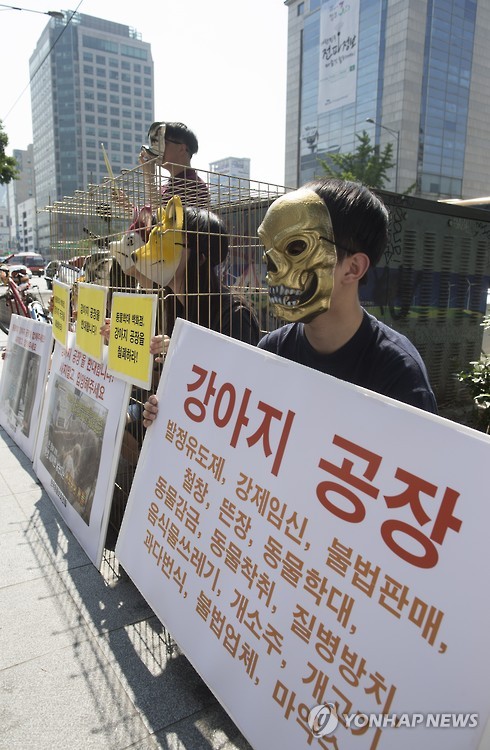 However, it is difficult to make the charges stick in most cases, and owners are rarely prosecuted, at least not for animal rights violations. (image: Yonhap)

Driven by the escalating public outcry, the MAFRA, along with local governments and the Domestic Pet Producers Association, have set out to investigate the issues of concern. The ministry is considering the implementation of stronger legal measures, as well as the establishment of a specific department that would handle animal rights issues.

However, animal rights activists claim that it’s difficult to expect real changes as long as government policies continue to favor businesses at the expense of animal protection.

“The fact that the government already eased its regulations governing dog farm operations clearly shows that it’s not interested in animal welfare,” said an official from KARA (Korea Animal Rights Advocates). “Unless there is a fundamental change in perspective, what they’re doing will only be temporary.”

“There’s a desperate need for an in-depth understanding of the reality of these dog farms, and authorities need to discover the real problems that lie within,” she added.