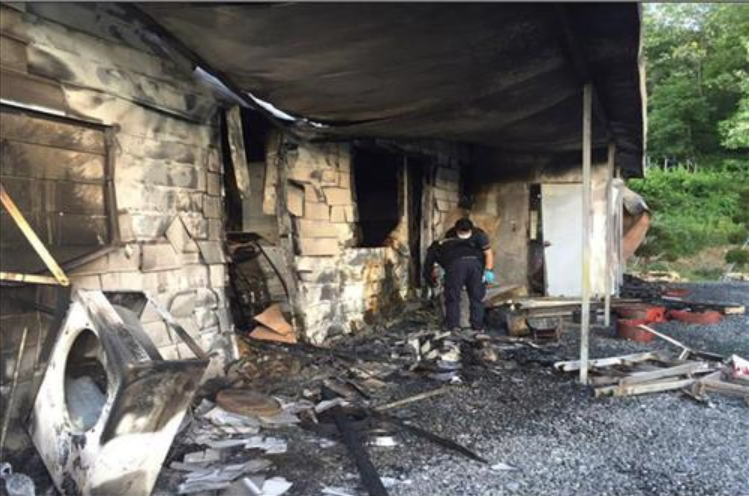 The fire, which began while A was away from the house, died down after 50 minutes, leaving the sandwich panel cage portion of the 132㎡ house completely burnt down, and resulting in the death of 90 dogs (mostly small breeds such as Petit Angel Maltese, Pomeranians, and poodles).

Cheongju, May 18 (Korea Bizwire) – On May 16, a fire began at the residence of an individual referred to as A (age 70) in Okcheon, Chungbuk Province, that resulted in the death of 90 caged dogs by burning or smoke inhalation.

The police investigation reported that A had built his house in July of last year to operate a ‘breeding factory’ for dogs, with the hopes of supplying them to pet shops. ‘A’ resided in the house along with his spouse, and both tended to the dogs in the mornings and evenings while going to their jobs at an insurance company during the day. “Whenever a dog gave birth to a puppy, we sent the puppy to an auction house to be supplied to pet shops,” said A.

The fire, which began while A was away from the house, died down after 50 minutes, leaving the sandwich panel cage portion of the 132㎡ house completely burnt down, and resulting in the death of 90 dogs (mostly small breeds such as Petit Angel Maltese, Pomeranians, and poodles).

The fire station reported that the house was covered in thick smoke by the time fire trucks arrived at the scene, and that the fire must have begun in the boiler room right next to the breeding farm, before spreading to the cages. As the fire spread from the boiler room to the farm, the toxic gas instantly filled the entire house – killing most of the dogs.

The house owner A arrived at the scene promptly after the fire began, and managed to save three dogs with the help of firefighters. However, two of them died soon after, and only one poodle survived. Both the police and the fire station are continuing their investigation into the source of the fire, but consider an electrical circuit issue as the most likely cause.

Law enforcement officers are also expanding their investigation to determine whether the practices at the farm could be classified as animal cruelty. Air conditioners and air purifiers were found in the breeding farm, indicating that the breeding conditions were not as poor as other puppy mills.

However, police officers are concerned that the owners might have been making use of Progesterone Releasing Intravaginal Devices (PRID), a common practice at puppy mills focusing on breeding as many dogs as possible in a short period of time.

PRIDs induce dogs to give birth as many as three times every year. “As puppy mills have recently became a huge controversy, we will investigate the breeding process as well as the conditions to see if there was any animal cruelty involved,” said a police official.

The burnt down puppy breeding farm was 33㎡ in size, and was registered as an official animal breeding business in Okcheon County in compliance with animal protection laws.  It was reported that the steel cages had been piled two or three high, and each held either one or two dogs.