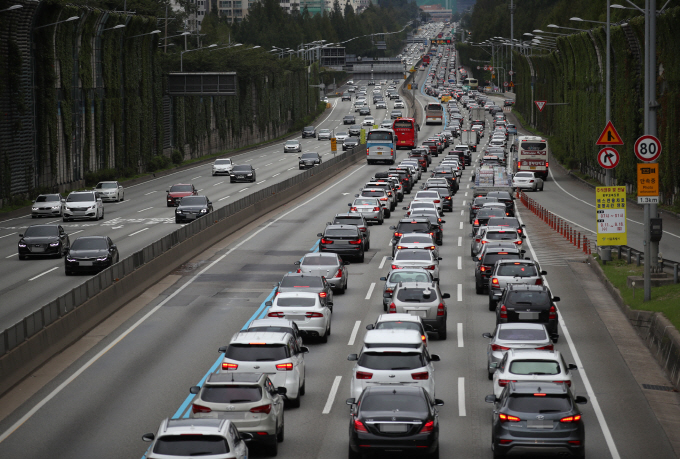 Traffic is backed up on the Gyeongbu Expressway on the first day of the Chuseok holiday on Sept. 12, 2019. (Yonhap)

SEOUL, Sept. 13 (Korea Bizwire) — A third of South Koreans are traveling long distances to reach their hometowns for the Chuseok holiday this year, a survey revealed Friday.

The findings, based on calls made to 9,000 households across the country by the Korea Transport Institute (KOTI), showed that a further six out of 10 people will go short distances to meet family and friends.

The rest said they will probably not be able to make visits because of work.

Chuseok, an autumn harvest celebration, is one of Korea’s biggest traditional holidays, and people usually head to their hometown to meet family and pay tribute to their ancestors.

The holiday follows the lunar calendar, and this year, people have Thursday and Friday off work.

Among those making trips, 38 percent said they will stay two days in their hometown, with another 35 percent planning on a three-day visit. A little over 10 percent of the respondents said they will not spend the night.

Compared to 2018, the numbers of people staying two and three days moved up around 12 percent and 5 percent, respectively, although those planning longer stays decreased, as the total holiday period, including the weekend, decreased to four days this year from five in 2018.

KOTI found that 54 percent of people surveyed will visit the graves of ancestors, with 27 saying they did so ahead of the holiday.