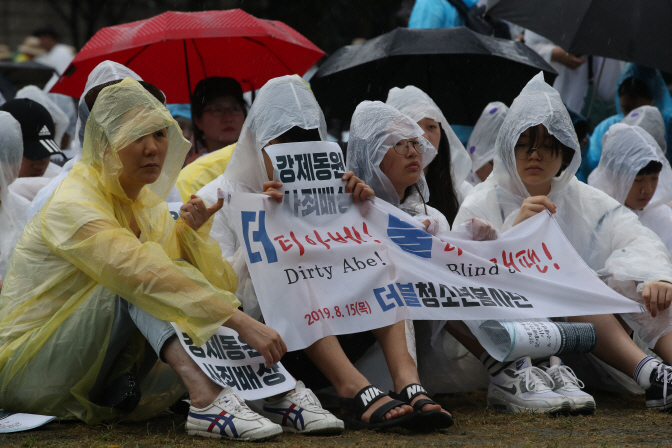 Citizens attend a rally to call for Japan to apologize and pay compensation to victims of wartime forced labor at Seoul Plaza on Aug. 15, 2019. (Yonhap)

SEOUL, Aug. 15 (Korea Bizwire) — Thousands of South Koreans staged a rally in downtown Seoul on Thursday to call for Tokyo to apologize for wartime forced labor, as they marked the 74th anniversary of their country’s liberation from Japan.

An estimated 2,000 people from some 10 local civic groups gathered at Seoul Plaza with a rallying cry, “We will stand firm as the living witnesses of history and join hands together to demand Japan’s sincere apology.”

Among them were Lee Chun-sik, one of the victims of forced labor.

“I have much to say, but I can’t speak much as I’m getting choked up … sorry,” he said.

The rally came amid high tensions between Seoul and Tokyo, which were caused by Japan’s recent export control measures.

The restriction have been seen as political retaliation for last year’s South Korean Supreme Court rulings that ordered Japanese firms to compensate victims of forced labor.

The export curbs have deepened anti-Japanese sentiment in South Korea, triggering a growing boycott of Japanese goods and a wave of protests calling for Tokyo’s full atonement for past atrocities.

Some protesters marched toward the Japanese Embassy in Seoul. They demanded that Japanese Prime Minister Shinzo Abe issue an official apology to the victims and offer proper restitution to them.

Japan argues that all reparation issues, stemming from its 1910-45 colonization of the Korean Peninsula, were settled under a 1965 state-to-state treaty that normalized bilateral relations.

But, the Supreme Court here has recognized individual victims’ rights to claim damages.

Some 5,000 members of the Korean Confederation of Trade Unions (KCTU), a key umbrella labor union, staged a separate rally at Gwanghwamun Square in central Seoul where they accused the Abe government of distorting history and criticizing its pursuit of heavier military armament.

“Japan’s Abe government is focusing on whitewashing (past wartime crimes) and economic invasion rather than apologizing for them,” KCTU chairman Kim Myung-hwan said in his opening remarks at the rally.

Earlier in the day, President Moon Jae-in said that he would gladly join hands with Japan if Tokyo chooses the path of dialogue and cooperation to end the bilateral diplomatic and trade row.