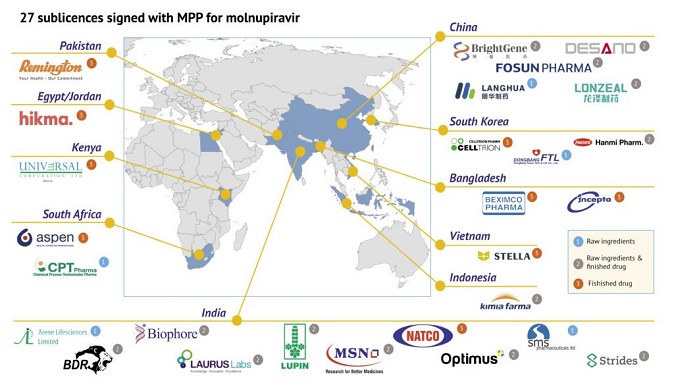 This image, downloaded from the website of the Medicines Patent Pool on Jan. 20, 2022, shows 27 pharmaceuticals chosen for the production of the low-cost version of the oral antiviral COVID-19 medication made by U.S. drugmaker MSD molnupiravir.

Celltrion will make the finished drug and Dongbang FTL will produce ingredients, while Hanmi will produce both.

The MPP, which works to increase access to and facilitate the development of life-saving medicines for low- and middle-income countries, signed a licensing agreement with the U.S. drugmaker last year to boost global access for molnupiravir.

“The companies that were offered the sublicense successfully demonstrated their ability to meet MPP’s requirements related to production capacity, regulatory compliance, and the ability to meet international standards for quality-assured medicines,” the MPP said.

“This is a critical step toward ensuring global access to an urgently needed COVID-19 treatment and we are confident that, as manufacturers are working closely with regulatory authorities, the anticipated treatments will be rapidly available in LMICs,” it added.

The MPP’s list of the generic manufacturers also includes 10 Indian and two Chinese firms, and 13 out of the 27 companies will produce both raw ingredients and the finished drug, according to the MPP.