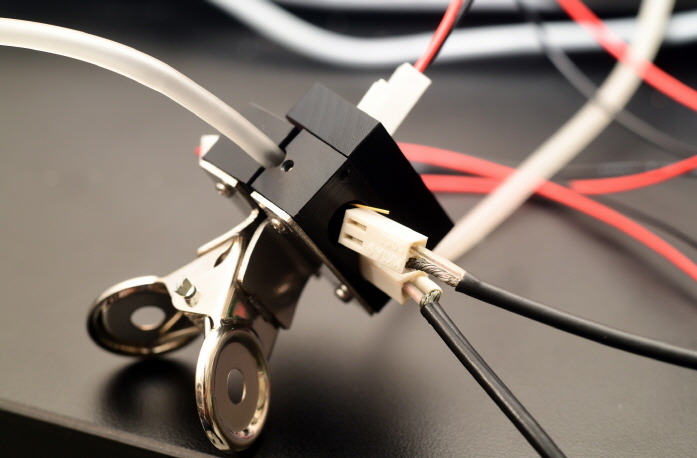 The new device measures the flow of drugs by comparing the temperature difference between upstream and downstream of the heated area after heating the fluid with a single heater. (image: Korea Research Institute of Standards and Science)

DAEJEON, Sept. 6 (Korea Bizwire) — A team of researchers has developed a monitoring technology that accurately administers even a drop of drugs and prevents dosage errors, helping to reduce medical accidents.

The Korea Research Institute of Standards and Science (KRISS) said Thursday it has developed a technology that measures even the smallest quantity of drugs injected per minute in real time.

There are countless cases of overdoses at hospitals, even if one sets a dosage with a drug injector.

The main cause is mechanical errors and malfunctioning drug injectors, which become more frequent as drug injectors are used for a long time.

The KRISS research team solved the problem by creating a thermal mass flowmeter based on infrared absorption.

The new device measures the flow of drugs by comparing the temperature difference between upstream and downstream of the heated area after heating the fluid with a single heater.

Since it is a “clamp-on” type of device similar to a laundry clipper, the flow rate can be measured by simply picking up the tube of the drug injector from the outside.

This means that there is no need to cut or install a flow meter separately.

The research team explained that it applied the concept of water’s infrared absorption changing at certain wavelengths depending on temperature to the technology.

The thermal mass flowmeter of the research team can detect even minute dosages, as small as 2 ml per hour.

The researchers stressed the capability of the technology by calculating the amount on a per minute basis. The amount per minute is 0.03 ml, which is less than a drop of water.

“If we monitor the dosage in real time, we can reduce the number of medical accidents caused by mechanical errors or misjudgment by the medical staff,” said Lee Seok-hwan, a senior researcher at the institute.

“It can also be used when injecting various drugs at the same time, and miniaturization of the device is possible,” Lee added.

Meanwhile, the paper containing the results was published in the August issue of Metrologia, an academic journal on measurement science.