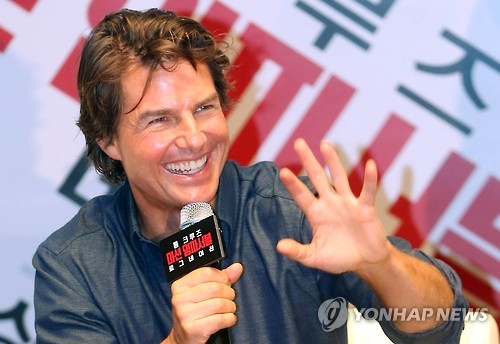 SEOUL, July 31 (Korea Bizwire) – Tom Cruise (53) showed that he still has the moves on his seventh visit to Korea. It took two hours for him to cover a distance of 80 meters, because he hugged and shook hands with all of his fans, and also took selfies with them.

The superstar actor visited Korea with Director Christopher McQuarrie (47) to promote the movie “Mission: Impossible – Rogue Nation.” They participated in a red carpet event at Lotte World Mall in Sincheon-dong.

People started gathering well before the time of the event, and when Tom Cruise finally appeared after a special performance by the idol group Infinite, the area in front of the stage was packed with over two thousand people.

The actor has been given the nickname ‘Kind Mr. Tom’ by Korean fans, as he has been exceedingly nice to his fans every time he visits Korea. As if he were trying to prove his nickname, the minute he stepped into the crowd, he took off his sunglasses and started signing autographs.

He autographed posters and DVDs of previous Mission Impossible movies that fans held out, took pictures with fans, shook hands and hugged those who opened their arms.

Once he was done with one aisle, he went back to the entrance to meet the fans standing by the opposite aisle. As things got hotter, he took his jacket off, rolled up his sleeves and continued signing.

Many fans also prepared gifts. Fans presented a cake with the airplane action scene from the movie, and Cruise expressed his gratitude with a surprised look on his face.

After pleasing his fans, zigzagging the red carpet for over two hours, Cruise got on stage, and yelled “I Love You (Sarangheyo)” in Korean. Then he said that he was honored to be there.

The red carpet event was aired at 15 theaters in 15 different cities including Daegu, Daejeon, Ulsan, Jeonju and Jeju. It was also aired live in Busan.

Tom Cruise asked the crowd in Busan if they were doing well in the heat. He also commented that he would like to visit Busan once again.

During his visit, Cruise met more fans than any other Hollywood star that has visited Korea. He attended a press conference before the red carpet event, and recorded an interview with Tiffany from Girl’s Generation. The interview will be aired on KBS 2TV, on July 31.