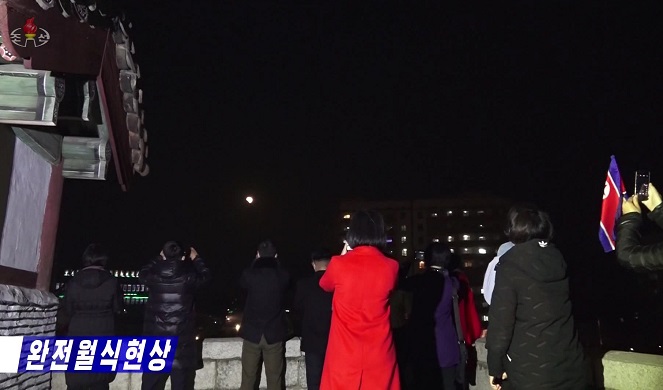 North Korean residents view a total lunar eclipse, in which the moon is completely covered by the Earth’s shadow, over Pyongyang on Nov. 8, 2022, in this photo captured from North Korea’s Korean Central Television the following day. (Yonhap)

SEOUL, Nov. 10 (Korea Bizwire) — The recent total lunar eclipse, in which the moon was completely covered by the Earth’s shadow, was observed in North Korea.

The North’s Korean Central Television reported related news on Tuesday, saying that the total lunar eclipse started at 6:09 p.m. and ended at 9:49 p.m. in Pyongyang.

The maximum eclipse, in which the moon is maximally obscured by the Earth’s shadow, was observed at 8:01 p.m. in the capital city.

The total lunar eclipse occurred concurrently with the occultation phenomenon, in which the moon covers Uranus during the lunar eclipse.

Over the past 200 years, the concurrent occurrence of a lunar eclipse and occultation was observed on Earth only four times.

The Gwacheon National Science Museum, a South Korea’s state-run museum, noted that such an event would not occur on the Korean peninsula again for another 200 years.