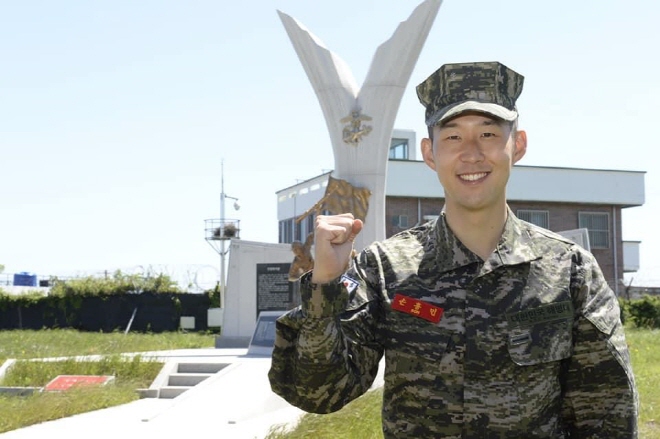 Tottenham Hotspur forward Son Heung-min in military fatigues poses for a photo at a Marine Corps boot camp in Seogwipo on South Korea’s largest island of Jeju, in this undated photo taken from the Marine Corps’ Facebook account on May 8, 2020.

SEOUL, May 8 (Korea Bizwire) — Tottenham Hotspur’s South Korean star Son Heung-min completed a three-week military training program with the best performance among all trainees Friday, as he excelled in shooting skills and other areas, officials said.

Son is one of the top five trainees to receive a prize at the camp’s graduation ceremony at a Marine Corps unit on the southern island of Jeju on Friday.

The exact scores of the trainees were not disclosed, but officials said Son was the top among a total of 157 trainees.

Son entered the camp on April 20 for basic military training required of those entitled to exemption from two years of mandatory military service.

Son earned the exemption after winning the men’s football gold medal for South Korea at the 2018 Asian Games.

“He received the ‘Pilsung’ prize which is one of five types of awards for best performers,” a Marine Corps officer said. Pilsung, which means “certain victory,” is a rallying cry for the Marine Corps as well as the Navy and the Air Force.

“All the courses were judged in a fair and strict manner, and his military training officers have said he went through the training faithfully.” 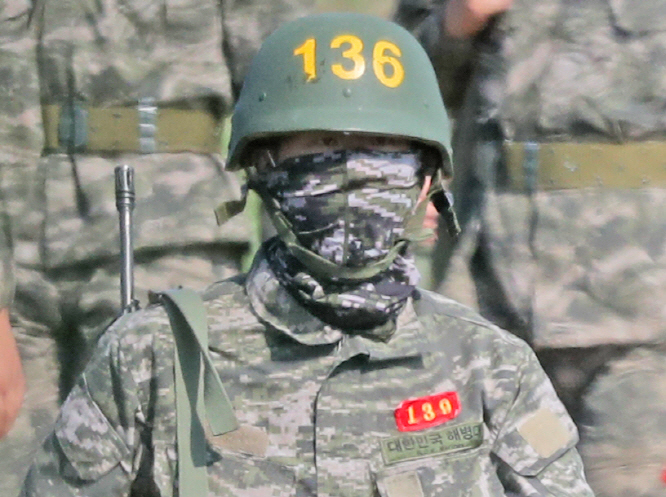 Tottenham Hotspur forward Son Heung-min, wearing a bulletproof helmet (136), returns to a boot camp after finishing a rifle drill at a Marine Corps firing range in Seogwipo on the country’s southern Jeju Island on May 6, 2020. (Yonhap)

Due to the COVID-19 virus, the completion ceremony was not opened to the public and the media, which was also what Son’s side had asked for. The Marine Corps instead uploaded photos of Son on its Facebook page.

The Premier League season has been on hold since mid-March due to the coronavirus pandemic, and Son returned home later that month to continue his rehab from a forearm injury and to complete his military training.

Able-bodied South Korean men must serve about two years in the armed forces. But Son only needs to complete the basic training and 544 hours of community service over the next 34 months while remaining an active professional athlete.

All South Korean male athletes who win a gold medal at the Asian Games or a medal of any color at the Olympics receive exemptions from conscription.