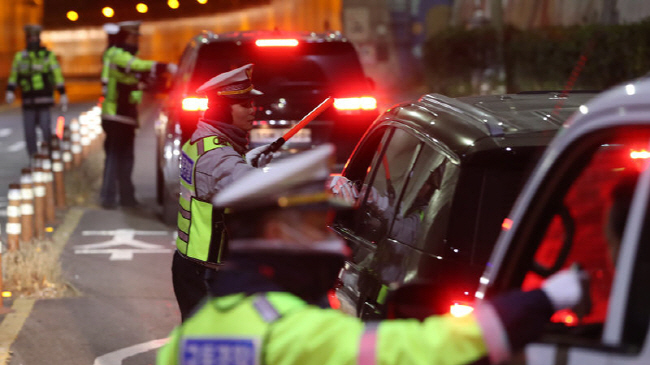 SEOUL, Jun. 24 (Korea Bizwire) — A revised traffic law introducing a lower legal limit of drivers’ blood alcohol level and stronger punishment against driving under the influence (DUI) will go into effect later this week, with an expectation of significant changes in drinking culture and lifestyles in a society relatively generous to DUIs, police said Monday.

“The amended road traffic law will be enforced starting Tuesday and a two-month special crackdown on drunk driving will be carried out on the occasion of the law’s implementation,” police said in a statement.

The corresponding figures under the current law are 0.05 percent and 0.1 percent.

In September last year, Yoon, an Army conscript and Korea University student, was hit by a drunk driver in Busan, suffering severe head injuries and died in November.

The death prompted the National Assembly to revise the traffic law for tougher DUI punishment.

In November, the National Assembly hastily passed bills, called the “Yoon Chang-ho Acts,” to make offenders face up to at least three years in jail and up to life imprisonment when a DUI results in death and to impose aggravated penalties for drunk drivers who are caught more than twice.

Previously, such offenders faced prison time of at least one year.

The Second Yoon Chang-ho Act is an updated version of the November law in order to beef up the levels of DUI crackdowns.

The new criterion of 0.03 percent is expected to usher in great changes in the drinking culture and lifestyles in a society, which is relatively lenient to drinking and drinking-induced accidents because chances are high that only a small cup of liquor now can result in a drunk driving violation to drivers.

Moreover, morning drives after heavy drinking the previous night can be caught in a DUI crackdown.

The police said a considerable number of drunk drivers who were caught in DUI crackdowns were driving with a hangover.

“Drivers who have hangovers should not be behind the wheel anymore and should use public transportation when going to work,” the police said.

Meanwhile, the number of cases caught in DUI crackdowns steadily dropped from 12,801 in November to 10,741 in December, when the first Yoon Chang-ho law was implemented, 8,644 in January and 8,412 in February.