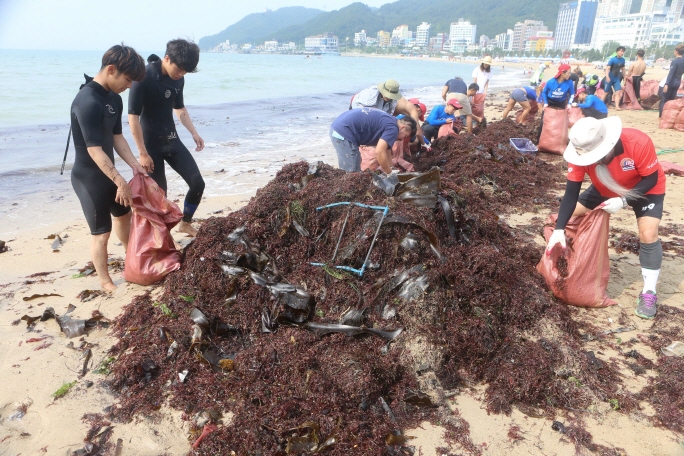 BUSAN, Jul. 23 (Korea Bizwire) — Busan’s Songjeong Beach was met by a sudden deluge of marine waste on Monday morning after Typhoon Danas disappeared on Saturday, leaving behind marine trash that washed up on the beach.

Some 100 people including employees of the beach management office, maritime life guards, and surfers pitched in to clean up the trash.

Songjeong Beach is no stranger to “trash waves,” since marine waste typically washes up on the beach whenever there is a tropical storm.

“Once there is a tropical storm, the trash piles up at the shore for the next three days,” said Shin Seong-jae, head of the Songjeong Surfing Association.

“Marine trash coming from rivers or ships that normally drifts in wide areas in the sea gathered into a sizable concentration and was carried to the shore by big waves caused by the tropical storm,” said Prof. Oh Seok-jin from Pukyong National University.

“The massive amount of waste that ends up on the beach represents only a tiny fraction of the entire marine garbage patch, which shows how serious the problem is.”