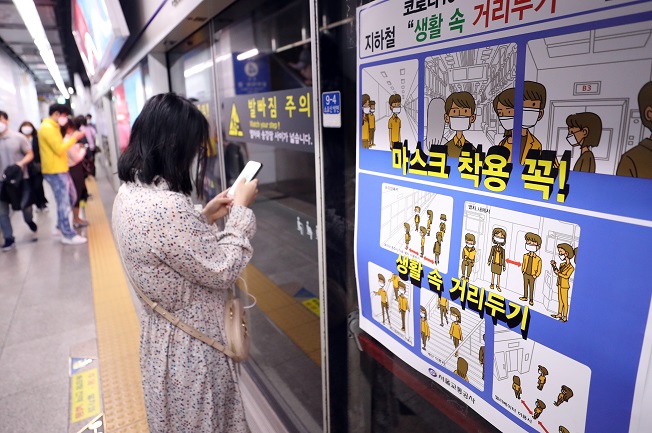 This photo, taken on May 26, 2020, shows a mask-wearing subway passenger waiting for a train at Seoul Station in central Seoul. South Korea mandated face masks at public transportation starting on the day. (Yonhap)

Starting last month, the government tightened rules by mandating face masks on all buses, taxis and subways and allowing drivers to refuse passengers without masks.

But as the pandemic shows no sign of letting up and summer heat is making it more difficult to wear the thick anti-virus masks, a growing number of people are opting to not wear masks or cover only part of their faces.

This has even coined the term “tuk-sk,” referring to wearing masks lower to only cover the wearer’s chin, with “tuk” meaning chin in Korean.

With the country still reporting scores of new COVID-19 infections for days, however, this has emerged as a source of quarrels among passengers.

“A few days ago, I got into a fight with an elderly man who refused to put on his mask saying, ‘Don’t you dare say I have a deadly disease,’” said a driver who drives an intracity bus in Seoul.

“If the health authorities say put on the masks, then all people should follow it,” he said, telling another passenger to put on a mask as the windows were closed for air conditioning.

The elderly passenger followed the direction, saying that he always carries several masks inside his backpack.

In some cases, however, fights have developed into more serious cases. 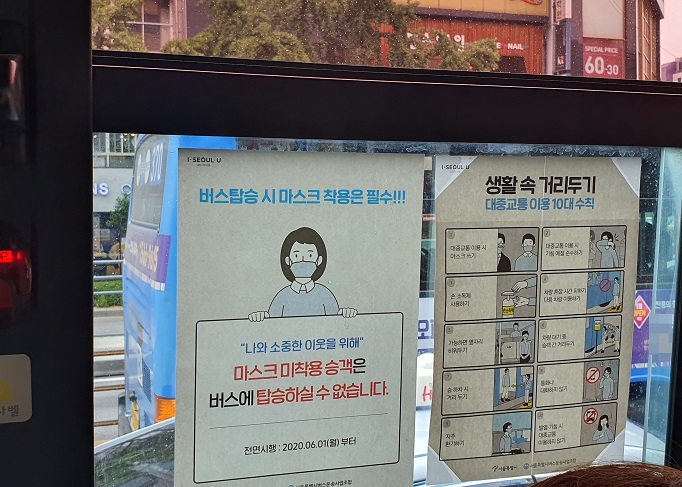 This June 24, 2020, photo shows a sign inside a bus that asks passengers to wear face masks when using public transportation. (Yonhap)

Last week, police asked the Seoul Southern District Court to detain a woman in her forties who had got into a bickering match with other passengers after they asked her to wear a mask.

The woman, who was apprehended at a subway No. 1 station, allegedly cursed at passengers asking her to wear a mask and delayed the train schedule for around seven minutes.

Police said the issue should not be taken lightly considering that “mandatorily wearing a mask on public transportation is an issue that is directly related to public health.”

The court, however, denied the request, citing that the woman said she didn’t wear the face mask due to health-related reasons and promised to wear it going forward.

Earlier this month, a man in his fifties was formally detained by the Seoul Eastern District Court after assaulting a bus driver and another passenger who asked him to wear a face mask.

Similar cases have been reported across the country.

In fact, police said that around 840 cases of fights between drivers and passengers have been reported in the past month since face masks became mandatory on public transportation.

People have been booked in 43 cases, with 25 of them occurring on buses. Cases that happened in taxis and on subways came in at 13 and five cases, respectively.

All but one of the booked people were men, with the majority of them in their fifties and sixties, the police said, adding that they plan to handle such cases more strongly and consult with transportation operators.

Meanwhile, health authorities have advised people to temporarily take off their masks outdoors on hot days as daytime highs have soared over 35 C on some days.

The Korea Centers for Disease Control and Prevention said that wearing masks outdoors can drive up heart rates and breathing rates, advising people to take off masks as long as distances between people are kept at 2 meters.

South Korea added 42 new cases on Monday, raising its total COVID-19 caseload to 12,757, according to the KCDC. It reported its first case on Jan. 20.