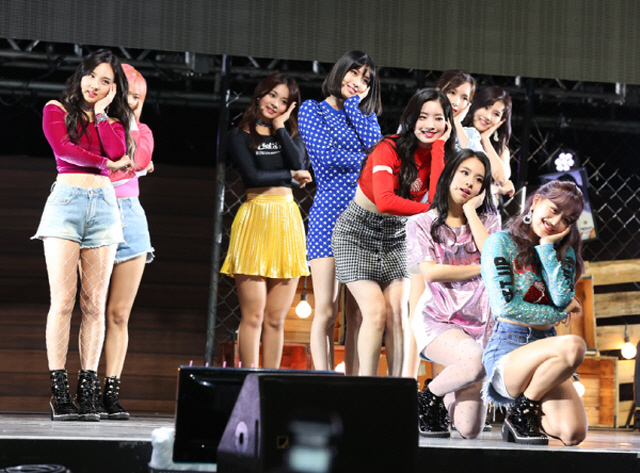 K-pop girl group TWICE performing on stage during a media showcase for its new EP album “What is Love?” at Yes 24 Live Hall in eastern Seoul on April 9, 2018. (image: JYP Entertainment)

SEOUL, Apr. 10 (Korea Bizwire) — K-pop girl group TWICE on Tuesday achieved another home run with its latest song, “What is Love?” peaking at No. 1 on five major music streaming charts.

The lead track for the band’s fifth EP album, which was released at 6 p.m. Monday, stood at No. 1 on five streaming services — Melon, Naver Music, Bugs Music, Mnet and Soribada as of 7 a.m. Tuesday. The song stood at second place on Genie and Olleh Music.

“What is Love? ” a bright, up-tempo synthpop track, was written by Park Jin-young, who is the founder of the group’s management agency JYP Entertainment. It became the second song that the singer-turned-businessman has provided to TWICE after “Signal,” which was released in May of last year.

Preorders of the EP, which is also titled “What is Love?” amounted to 350,000 physical units.

Since debuting in 2015 with “OOH-AHH,” TWICE has become a reputable force in today’s K-pop scene, churning out back-to-back hits, including “Cheer Up,” “TT,” “Knock Knock,” “Signal,” “Likey” and “Heartshaker.” The nine-member act includes two Japanese singers and a Taiwanese member.

TWICE plans to kick off its second world tour in May by holding concerts at Jamsil Gymnasium in Seoul from May 18-20. The band is scheduled to hold two concerts in Japan between late May and early June.