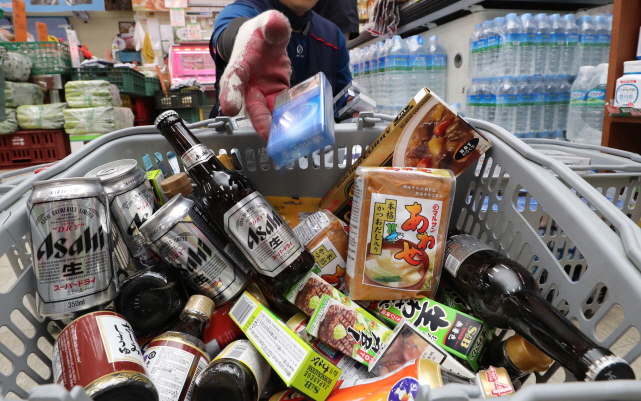 Some convenience stores and malls decided not to sell any Japanese products last week. (Yonhap)

SEOUL, Jul. 12 (Korea Bizwire) — A recent survey has revealed that 7 out of 10 Koreans plan to participate in a boycott against Japanese products amid Japan’s measures to impose restrictions on exports to South Korea.

According to a survey conducted by Realmeter commissioned by Traffic Broadcasting System (TBS), of the total survey participants, 66.8 percent said they would take part in the “future boycott campaign.”

The survey was conducted with the participation of 501 adults nationwide and was released on Wednesday.

Except for conservatives and those in their 60s and older, the majority was willing to participate in the boycott for the foreseeable future, regardless of ideology, region or age.

The majority of the respondents with progressive ideas, those living in the North and South Jeolla Provinces, Busan, Ulsan, South Gyeongsang Province as well as women in their 50s and younger age groups, responded that they are “currently participating in the boycott.”

The number of “currently not participating in the campaign” responses came from conservatives, Seoul, Daegu and North Gyeongsang Province, and those in their 60s and older.

People taking stance midway between the conservatives and the liberals, people in North and South Chungcheong Provinces and the Gyeonggi and Incheon regions, were divided.