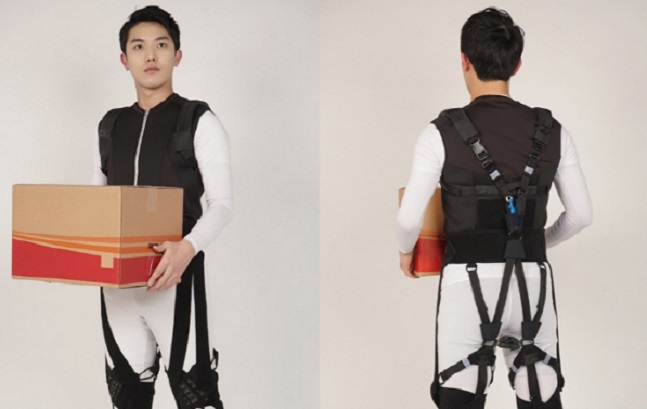 This photo, provided by the College of Engineering of Seoul National University on Aug. 26, 2021, shows a motorless exosuit.

SEOUL, Aug. 27 (Korea Bizwire) — A South Korean research team has developed the world’s first unpowered elastic exosuit that can help correct the motion of wearers for safe lifting since its elasticity changes depending on the motion of the wearer.

A joint research team of the College of Engineering of Seoul National University (SNU) and SNU Hospital announced on Thursday that it had succeeded in developing a ‘motorless elasticity-changing exosuit’ that ensures low risk motions when lifting objects.

The exosuit, based on the research team’s ‘body drive-type changeable impedance (elasticity) technology’, does not require a separate power source.

The elasticity of the exosuit changes by the motion of the wearer, encouraging them to bend their knees and squat instead of bending over.

The exosuit is highly elastic when wearers lift using a squat motion. Accordingly, they can feel comfortable when lifting objects from a squat position.

In contrast, the exosuit is less elastic if wearers bend over, thus making them feel uncomfortable when lifting objects.

The research team conducted a test with ten people who had no experience using such suits. The test revealed that after wearing the suits, nine of the participants employed a squatting position to lift heavy objects instead of bending over at the waist.

Furthermore, the amount of energy consumed when lifting objects declined by 5.3 percent on average thanks to the suit’s assistance effect.