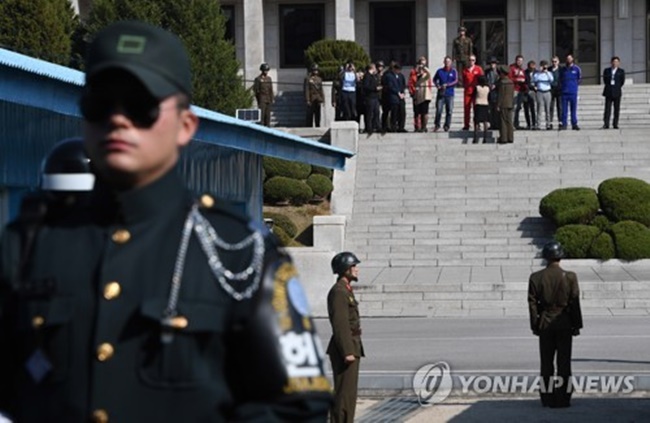 It cited concern over unnecessary speculation on what happened at the truce village of Panmunjom on Monday afternoon. (Image: Yonhap)

It cited concern over unnecessary speculation on what happened at the truce village of Panmunjom on Monday afternoon.

The North’s soldier suffered multiple gunshot wounds, chased by his fellow soldiers armed with pistols and AK-47 rifles at the Joint Security Area (JSA), according to defense authorities.He was recovered by South Korean guards there and transported to a hospital south of Seoul. Following surgery, he remains unconscious but he’s reportedly not in life-threatening condition.

The UNC, which oversees the armistice on the peninsula, offered to release a CCTV clip showing the movielike scene.

On Wednesday, it notified local media of a decision to open footageto the public the following day.

The Ministry of National Defense (MND) officials previewed the 26-second edited version and expressed worries that it may trigger misunderstandings about the incident amid public controversy over whether the South’s troops responded properly to it.

They suggested the UNC provide a longer clip to help better understand the situation.

The South said its JSA troops followed the rules of engagement set by the UNC.

But critics argue that they should have returned fire, as the North’s soldiers shot more than 40 times during the defection, with some shots crossing the border.

President Moon Jae-in also raised the need for the UNC to revise the rules, saying it’s “the people’s thinking” that they should have fired warning shots at the very least.

A news report said the North Koreans even apparently crossed the military demarcation line briefly while running after the defector.

The MND press corps strongly asked the UNC to make public the 26-second version first as planned and show more later if needed.

But the command rejected the request, saying it will have internal consultations on what to do. It added Gen. Vincent K. Brooks, the commander of the UNC, is visiting Japan.

They lodged a strong complaint with the UNC, as they refrained from reporting on the JSA case, waiting to see the footage in person.

“Whatever the reason is, the UNC broke its promise with the press. It’s a matter of trust,” a reporter pointed out. “It will only cause more confusion and misinterpretation amid a number of news reports based on limited information. The UNC will be responsible for that.”

Another journalist said that’s why some people believe the UNC and the South’s military may be trying to conceal something associated with the JSA case.