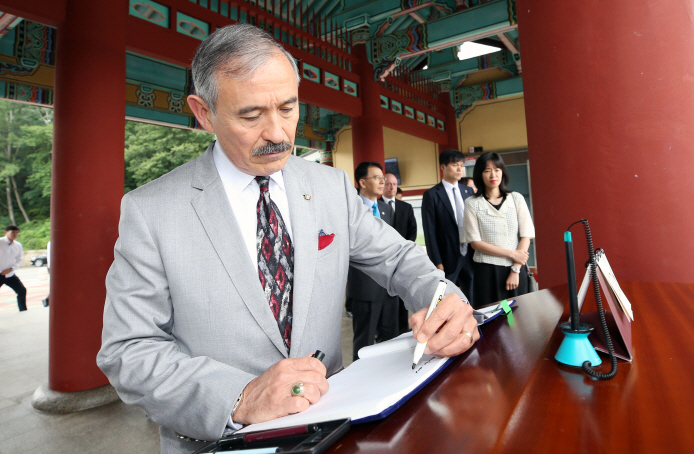 U.S. Ambassador to South Korea Harry Harris writes a message in a guestbook at the National Cemetery for the May 18th Democratic Uprising in Gwangju, 330 kilometers south of Seoul, on July 22, 2019. (Yonhap)

In his first visit to the National Cemetery for the May 18th Democratic Uprising since taking office a year ago, Harris laid a flower and burned incense at a memorial tower for those who died in a 1980 bloody crackdown on a pro-democracy uprising in the city now revered as the cradle of the country’s democracy.

“I will remember and honor the spirit of human rights and democracy that Gwangju achieved through the sacrifices its citizens made,” Harris wrote in a guestbook at the cemetery.

At the grave of Yoon Sang-won, a key democracy campaigner who perished during the brutal crackdown, Harris was briefed on his role in staging a massive rally against the then military-backed government of Chun Doo-hwan.

The ambassador began his two-day trip to Gwangju on Sunday to support Team USA at the 2019 FINA World Championships, a spokesperson at the U.S. Embassy in Seoul said.

“While in Gwangju, Amb. Harris also met with Gwangju Mayor Lee Yong-sup and paid his respects at the May 18th National Cemetery,” the spokesperson added.

A day earlier, Harris was also seen taking a selfie with Park Tae-hwan, a former world champion swimmer and honorary ambassador for the FINA competition.