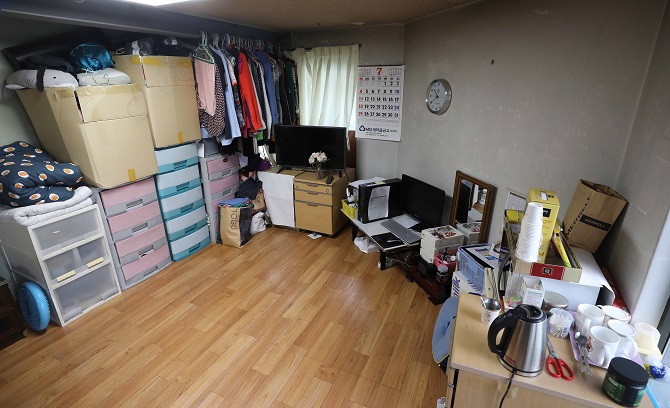 This photo taken on July 15, 2021, shows a staff lounge at a Seoul National University dormitory where a sanitation worker was found dead on June 26. (Yonhap)

SEOUL, July 30 (Korea Bizwire) — The labor ministry said Friday that Seoul National University harassed its sanitation workers by requiring them to take written exams that were largely unrelated to their work.

The ministry carried out an investigation into allegations of workplace harassment after a sanitation worker at one of the university’s dormitories was found dead in a staff lounge in June.

The 59-year-old woman, surnamed Lee, is presumed to have died from a heart issue while taking a break, which her family and labor union officials blamed on stress from harassment at work.

“We determined that there was harassment in some areas of the workplace and advised Seoul National University to make improvements,” the ministry said.

“The written exam included a considerable number of questions that were unrelated to the job of cleaning and (the dormitory’s safety manager) arbitrarily put up a screen during the exam that said the results would count toward their performance evaluation, even though no such evaluation system exists,” it said.

According to the labor union representing Lee, the exam required sanitation workers to write the dormitory’s name in English or Chinese characters and to know the year the dormitory opened.

On the manager’s claim that the exam was meant to educate workers for when they meet foreigners or students’ parents, the ministry said “it is difficult to view a written exam without prior training as an appropriate education tool.”

It also said the manager harassed the workers by requiring them to dress according to a dress code and assessing their attire, in the absence of relevant regulations.

The ministry said it has urged the university to immediately take corrective measures and come up with ways to prevent a recurrence, including by taking “necessary steps” against the manager and educating all of its workers on harassment prevention measures.

“In the event that Seoul National University does not implement our guidance, we plan to subject it to our supervision and respond sternly,” the ministry said.

A university official said the school has received the ministry’s guidance and is currently reviewing the recommended measures.

“We will do our best to faithfully implement them,” the official said.