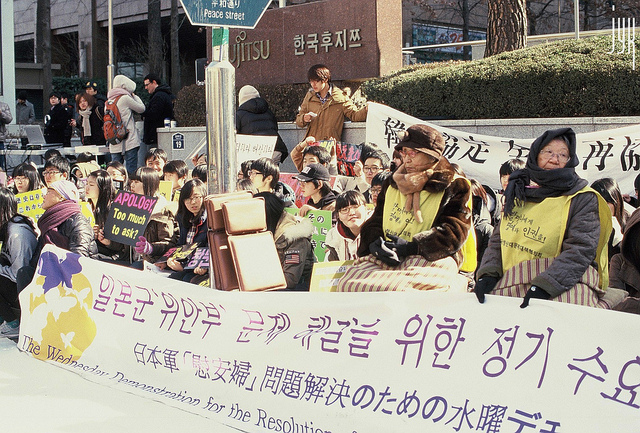 Historians estimate that up to 200,000 women, mainly from Korea, which was a Japanese colony from 1910 to 1945, were forced to work in front-line brothels for Japanese soldiers during World War II. (image: joonyoung kim/flickr)

A group of American history scholars have issued a protest statement denouncing Japan’s demand for U.S. publisher McGraw-Hill to alter the description of the sexual slavery issue in one of its textbooks, saying no government should have the right to “censor history.”

Japan’s move is seen as an attempt to whitewash the atrocity.

Critics have also said the Japanese move raises questions about academic freedom in the country.

“We continue to emphasize the importance of approaching historical legacy issues in a manner that promotes healing and reconciliation for all parties,” a State Department representative said. “As a matter of principle we stand in strong support of academic freedom as a foundation of democratic society.”

Historians estimate that up to 200,000 women, mainly from Korea, which was a Japanese colony from 1910 to 1945, were forced to work in front-line brothels for Japanese soldiers during World War II. But Japan has long attempted to whitewash the atrocity.

Japanese Prime Minister Shinzo Abe also told a parliamentary meeting earlier this month that he was surprised to learn how the McGraw-Hill book describes the sexual slavery issue and pledged government efforts to continue to push for changes.

The sexual slavery issue has been the biggest thorn in frayed relations between Japan and South Korea, with Seoul demanding Japan take steps to address the grievances of elderly Korean victims of the atrocity and Japan refusing to do so.