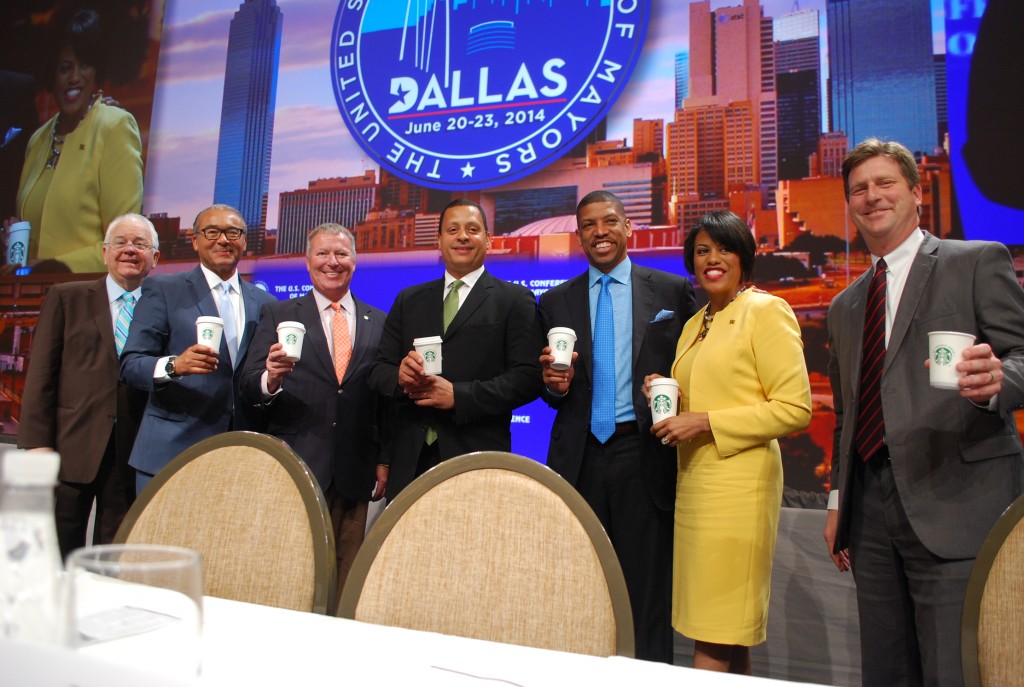 Through the new Solutions City℠ initiative, mayors in five cities – Sacramento, Baltimore, Columbus, Orlando, and Phoenix – will bring together constituents and other local leaders for town hall meetings in their neighborhood Starbucks store to identify and tackle civic challenges on three key issues: providing access to education, supporting veterans, and empowering opportunity youth.

Over the arc of one year, they will solve concrete community problems that they identify together. While Starbucks will serve as the arena for these community conversations, the U.S. Conference of Mayors (USCM) will lend its network of dedicated mayors from around the country to help share best practices and spark greater impact.

“More and more people feel their communities need to take ownership of local problems, spark a spirit of bottom-up reform, and act, but  they don’t always know how – or get the invitation to start,” said Sacramento Mayor Kevin Johnson, President of the USCM. “The Solutions City℠ program is an opportunity to change that. With this program, we’ll bring mayors, citizens and other community leaders together, in a familiar forum like your local Starbucks, where we all have a hand in finding and solving problems.”

For Starbucks, the program is a natural fit. Customers often gather in stores around cups of coffee to discuss issues impacting their families, schools and communities. It’s the idea of the “third place” that has been at the heart of Starbucks business for years. More recently, with the launch of the Starbucks College Achievement Plan and commitment to hire 10,000 Veterans and military spouses, the Solutions City℠ focus on education, opportunity youth and veterans represents a fit with the values of its partners (employees) and customers.  Starbucks will also look at opening Community Stores in these markets to not only serve as a venue for the town hall community meetings, but where part of each store’s revenue will be dedicated to solutions-based programs in those communities.

“With every cup in every community, we always strive to make a positive impact for those we serve, both on the job and in our communities,” said Blair Taylor, executive vice president and chief community officer for Starbucks.  ”Mayors are already local problem solvers.  With the public-private partnership of the Solutions City℠ program, we will work with Mayors and community stakeholders to strengthen dialogues and ultimately, to bring tangible solutions to life.”

USCM and Starbucks unveiled the initiative at the 82nd Annual Meeting of the U.S. Conference of Mayors on Saturday, June 21. More than 200 of the nation’s mayors from cities large and small came together to discuss bold new ideas to improve the economic health of the nation’s cities, transportation, education, housing, and help for returning Veterans. Taylor was joined by the five mayors participating in the initial program – Sacramento Mayor Kevin Johnson, Columbus Mayor Michael Coleman, Orlando Mayor Buddy Dyer, Phoenix Mayor Greg Stanton, and Baltimore Mayor Stephanie Rawlings-Blake.

“Mayors across America have shown, time and again, their ability to solve tough social and economic challenges with minimum resources,” said Tom Cochran, Executive Director of the U.S. Conference of Mayors. “Combined with Starbucks scale and unique place in the neighborhoods they serve, we have an opportunity to create new forums for dialog, with simpler ways for citizens to participate in that full journey of problem-solving.”

Starbucks and each of the five cities involved will carefully evaluate the value and impact of the program. If the Solutions City℠ program proceeds to a larger roll-out, Starbucks will consider a full applications process for all USCM members.

Since 1971, Starbucks Coffee Company has been committed to ethically sourcing and roasting high-quality arabica coffee. Today, with stores around the globe, the company is the premier roaster and retailer of specialty coffee in the world. Through our unwavering commitment to excellence and our guiding principles, we bring the unique Starbucks Experience to life for every customer through every cup. To share in the experience, please visit us in our stores or online at Starbucks.com.

About the U.S. Conference of Mayors

The U.S. Conference of Mayors is the official nonpartisan organization of cities with populations of 30,000 or more. There are nearly 1,400 such cities in the country today, and each city is represented in the Conference by its chief elected official, the mayor. To learn more, visit usmayors.org