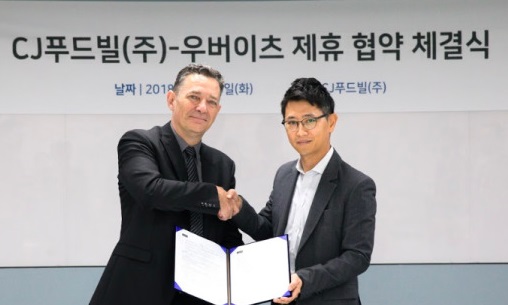 Jean-Marc Serayssol (L), head of Asia Sales at Uber Eats, shakes hands with a CJ Foodville executive at the signing ceremony of a partnership in Seoul on Aug. 28, 2018. (image: Uber Eats)

Uber Eats said major CJ Foodville brands, such as VIPS, Cheiljemyunso, The Place and Juice Solution, would be easily accessible through its app in Seoul, a heavily populated city with a population of some 10 million.

Eight out of 10 South Koreans use smartphones, and they increasingly order popular food items through mobile apps.

“We are excited about our partnership with CJ Foodville, the national representative food service brand, bringing its diverse selection to our customers,” Jean-Marc Serayssol, head of Asia Sales at Uber Eats, said of the deal signed last Tuesday. “With this partnership, Uber Eats customers can now order CJ Foodville brands at the simple tap of a button, and Uber Eats will continue to expand to provide our services anytime, anywhere.”

The food franchise unit of South Korean food and entertainment conglomerate CJ Group has about 1,500 franchises across South Korea and nearly 400 franchise stores in seven countries, including the United States, China and Vietnam. CJ Foodville is planning to reinforce the collaboration with Uber Eats overseas.

Uber Eats is part of Uber’s attempt to expand its presence in South Korea, where the company’s flagship ride-sharing service, Uber X, was banned in 2015 because it conflicted with the local transportation law.